LinkedIn Hero of the Day: Capt. C. B. "Sully" Sullenberger of USAirways

Everyone across America has been riveted to either their television screens, twitter or flickr feeds these past 24 hours, as 150 passengers & crew of a US Airways Flight survived a crash landing on the Hudson river soon after take off. All eyes are on the pilot, Chesley B. "Sully" Sullenberger, for his expert handling of the situation. CNN reports:

Passengers on the US Airways flight that crash-landed into the Hudson River Thursday afternoon praised the actions and courage of the pilot, a safety consultant with 40 years of experience in the aviation industry.

Kudos poured in from for Capt. Sullenberger in light of his courageous and calm handling of the situation. Mayor Michael Bloomberg of New York City, said:

"He did a masterful job of landing the plane in the river. He was the last one off the plane."

Also, tape recordings of the radio traffic from Flight 1549 reported the pilot was "extraordinarily calm" during the event.

"There was no panic, no hysterics. It was professional, it was calm, it was methodical. It was everything you hoped it could be."

Look no further than Capt. Sullenberger's LinkedIn Profile, for further proof of his skill, expertise and competence: 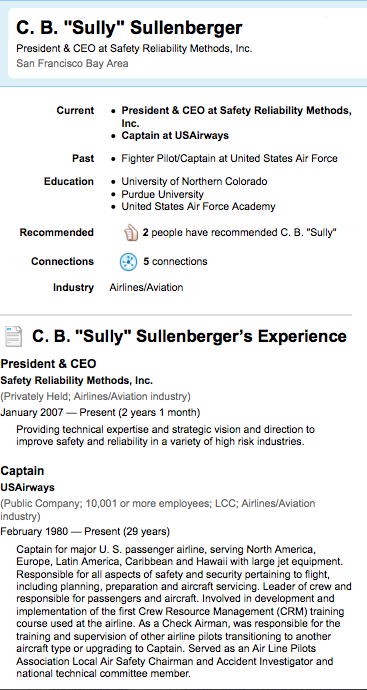 Looks like the recommendation section of Captain Sullenberger needs some updating after today's steady stream of kudos. Our best wishes go out to the passengers, crew and to our Hero of the Day - Capt. C. B. Sullenberger!