Today we're announcing a partnership between LinkedIn and Twitter – and new features that we think are going to make both Twitter and LinkedIn more powerful for you.

The idea is simple: When you set your status on LinkedIn you can now tweet it as well, amplifying it to your followers and real-time search services like Twitter Search and Bing. And when you tweet, you can send that message to your LinkedIn connections as well, from any Twitter service or tool.

Why? Because when you're trying to get something done, you want Twitter and LinkedIn to work together. Like peanut butter and chocolate! Or at least that's what Biz and Reid think:

LinkedIn has always been about helping you to build your professional identity on the web. The many elements that make up your online professional brand range from your LinkedIn profile to the many professional conversations you’re a part of. Status has proved valuable to our users, from finding new assignments and jobs to kick-starting a global business enterprise.

Now you can amplify those messages by broadcasting them to your audience on Twitter.

The feature is now available to all of our users, and with today's launch, we're making that two-way communication between your status updates and tweets a breeze to set up. Here's how it works:

Want to share some interesting ideas about an industry-specific article you’ve just read with an even broader audience? Or how about letting people view your Twitter account name on your LinkedIn profile? Begin by joining your LinkedIn and Twitter accounts in just a few clicks. All you need to do is check the Twitter box under your Network Updates box on the homepage and follow a few simple steps. 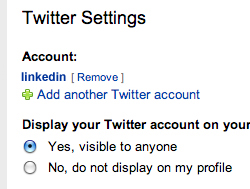 As a professional online and in the real world, you’ll often find articles or think of ideas that would be useful to share with your Twitter followers and your LinkedIn connections. It's about sparking interesting conversations. Now you can share from anywhere. As part of the setup process, you can choose to either send all your tweets or select tweets from Twitter back to LinkedIn as a status update.

If you pick the latter, don’t forget to add the #li or #in hashtag to every relevant tweet you’d like to send back to LinkedIn. Here’s a good example:

So go ahead and get started. Link your LinkedIn and Twitter accounts today to add a new dimension to your professional conversation.