Come run with us and break a Guinness World Record at Bay to Breakers!

Ed. note: This is a special edition post on folks working at LinkedIn talking about their true passion – at work and in the real world. This week's post comes from Armen Vartanian, who's not only training to break a world record at Bay to Breakers this year but also encouraging you to do the same!

Happy Cinco de LinkedIn -- our 7th birthday anniversary and cause for celebration. This year, in honor of our big day, we're attempting something big. Really big. Guinness World Records BIG. At one of the world's largest and oldest footraces, ING Bay to Breakers (May 16, 2010), we'll be attempting to form the world's longest human centipede, requiring over 2,026 people. This is a once in a lifetime opportunity to set a world record and we would like for you, your friends and colleagues to be a part of this historic event. Through the power of our LinkedIn networks we can make this happen!

It's so easy for us professionals to get caught up in the daily grind and forget to balance out our lives. We need to reward ourselves for the hard work that we put in day-to-day and do that in a manner that fully utilizes our passion. And, this year's Bay to Breakers is one such opportunity to balance out serious work with serious fun.

I currently train with the goal of being a 2012 Olympian, but one of the runs I look forward to most is my Friday evening runs with my LinkedIn coworkers. It's the camaraderie built while running with my colleagues and the opportunity to share my passion with them, which makes these runs one of the workouts I look forward to most – for the fun, not necessarily the speed training! The Bay to Breakers centipede is going to be just like those Friday evening runs....on a much larger scale.  People from all walks of life, linking up and enjoying the day together, whether that's through running or walking or maybe wearing a costume. 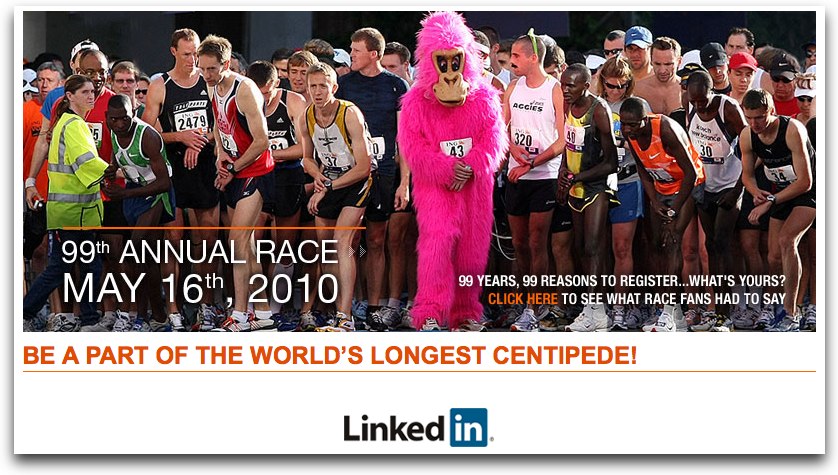 Be a part of the world's longest centipede this year at Bay to Breakers![/caption]

In addition to the "Worlds Longest Centipede" record, we are also attempting to be the "World's Fastest Centipede".  I've networked within the running community to bring together a team of Olympic hopefuls and elite marathoners hoping to win and set a new world record for the 12k distance. The team consists of athletes at the highest level of competition. They include: Chris Chavez, Stephan Shay, David Kinsella, Austin Ramos, Drew and Kyle Shackleton, along with a few other speedsters. I'm really excited that so many of my LinkedIn running companions will be there too setting a record of  their own as well as supporting us. Hopefully we'll see you out there!

If you'd like to link up and be a part of this record-breaking attempt, register here and show up race morning at Corral E. Organizers will hand out limited edition “In” sweatbands along with connecting tape to keep the centipede together. All centipede members must register individually. If you have already registered, just show up at Corral E on race day.

For more information, join the LinkedIn World Record Breaker group here. And, invite your friends and colleagues from your LinkedIn network to participate.