LinkedIn for BlackBerry: Storm and Pearl Join the Party!

In March, LinkedIn launched our first native application for the Blackberry. While we knew this was one of our most hotly requested new features, the rapid adoption of the new app has been amazing to watch. Since the debut of LinkedIn for BlackBerry 1.0, the team has been working hard on an update that addresses some of the major requests from our members. The result of that work is now available for download as LinkedIn for BlackBerry v1.1. You can download it directly from LinkedIn right now:

LinkedIn for BlackBerry 1.1 will also be available for download from the BlackBerry App World application on your smartphone shortly. We now support the following BlackBerry models:  Tour, Curve, Bold, Pearl, Storm and over 21 devices running BlackBerry OS v4.3 or later.

The new version of LinkedIn for BlackBerry adds support for the Storm and Pearl families of devices. Getting access to LinkedIn on these devices has been a top request from our users, and this release continues our efforts to help you leverage the power of your professional network anytime, anywhere. 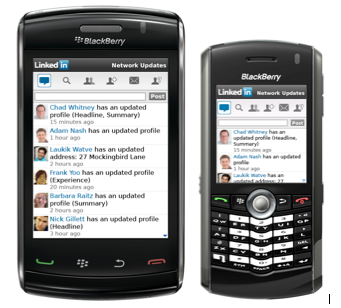 As we grow internationally, it’s increasingly important that we enable our members to interact with our mobile applications in their native language. Like LinkedIn.com, LinkedIn for BlackBerry is now localized for our members in Italy and Brazil:

With the new version of LinkedIn for BlackBerry, we provide more detail of what your connections have been changing on their profile. You can now see what sections have been changed (Education, Headline, Experience, etc.), as well as when your connections add things like an Instant Messenger account, Twitter account, or add their birthday to their profile.

With these changes it is now much easier to keep up with what your network is doing while mobile.

In addition to the new devices and profile update changes, we’ve also listened to the user community and addressed a number of issues they have raised in the LinkedIn for BlackBerry group and through our feedback email address. In addition to these fixes, our existing users should also see some improvements in how we use fonts, as well as some improvements to how we update the BlackBerry Contacts application when you’ve enabled address book integration with LinkedIn.

We’re very excited to hear from you and hear suggestions for new features and improvements.

LinkedIn for BlackBerry v1.1 is live and available immediately. Get it now.