Level Up! How Millennials are Changing the Promotion Game

January is almost over. But if you didn’t get that promotion, don’t worry -  there’s always April, especially if you’re in India.

One of the questions we’ve heard from you is whether there is an ideal time of the year to ask for a promotion. Does the answer depend on whether you are in Australia or in France? Does it change if you are a teacher or an engineer?

We decided to look for answers in the LinkedIn data. By analyzing over 90 million LinkedIn members’ career histories, we can observe the evolution of labor market trends and discover surprising, interesting or simply fun insights.

New Year, New You vs. Generation “Next!”

The data confirms that January is indeed the most popular month for promotions. However, we do see a surprising phenomenon: promotions are starting to spread more throughout the year. During the 1990’s, 22% of the promotions occurred in January, but in the most recent decade  that number decreased to 16%. 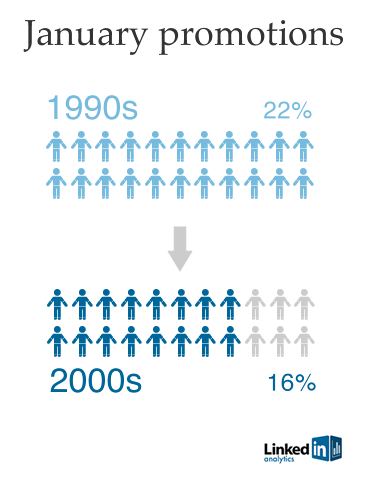 Percentage of promotions occurring in January vs. the rest of the year for the past two decades. January is losing its hold as professionals are promoted more evenly throughout the year.[/caption]

What is causing this dramatic shift? Are we seeing a more fluid workforce, where you are the brand and need to be proactive in the advancement of your career?

Further analysis reveals that “Millennials” (aka Generation Next) are leading this trend - specifically, professionals born in the 1980s and 1990s. Compared to previous generations (e.g., the Baby Boomers), their promotions are less concentrated in January and instead spread more evenly throughout the year: 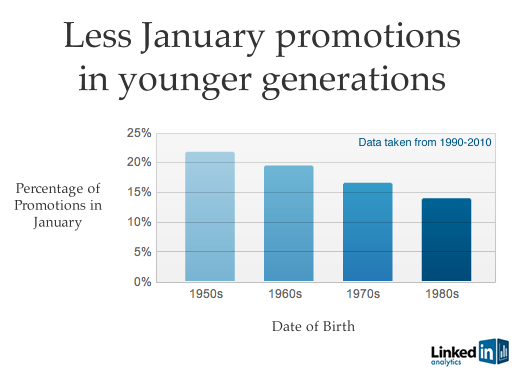 Millennials’ promotions spread out more evenly throughout the year. Promotions for Baby Boomers are more concentrated in January.[/caption]

What is causing this generational shift in the timing of promotions? Perhaps Millennials have “outlandish expectations”of the workplace and are asking for promotions throughout the year.

But there are other possible explanations that we can consider:

Do these hypotheses reflect your experience? Do you have others to share? Take our poll on when you prefer to ask for a promotion.

Does the best time to be promoted vary around the world? Again, we turn to the data of millions of our international members.

In the US, while January is the top month for promotions, the spread throughout the year is more uniform than the global average. That’s good news for US professionals who have missed the January wave, especially since more than 98% of US companies plan to increase base pay in 2011.

Other countries show their own distinctive character. In France (as in the rest of southern Europe), the promotion data reflects the traditional August vacation and the corresponding September surge. In Australia, we see a peak in July -- the beginning of their fiscal year. In India, the fiscal year begins in April, leading to the unique result that April trumps January as the most popular month for promotions there. 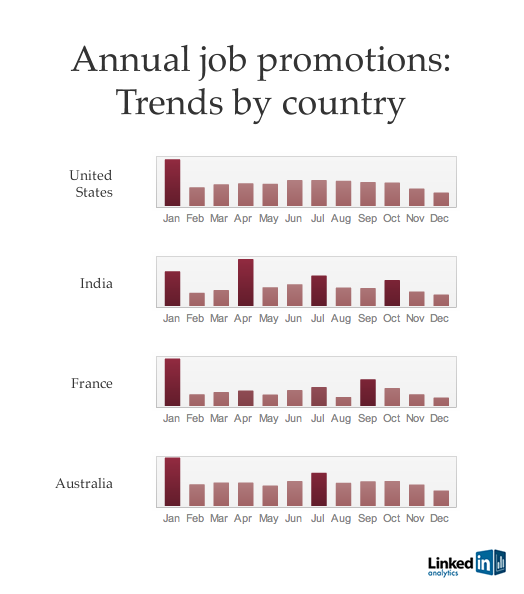 Promotions around the globe: Percentage of promotions occurring each month, based on millions of career histories for the past 20 years.[/caption]

We’ve seen how promotions vary throughout the world - but are there differences across industries? Indeed there are -- in the form of distinct seasonal trends. We’ve removed the peak month of January from these last graphs to highlight the differences among industries. 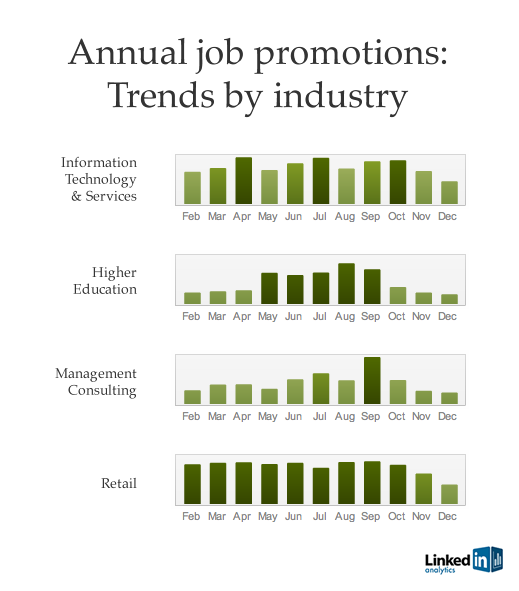 Information Technology companies follow a typical quarterly pattern, with promotions concentrated at the beginning of each quarter.  However, in the Higher Education industry promotions coincide with the summer vacation months. Management Consulting complements the January spike with a second spike in September. Finally, Retail spreads promotions almost uniformly throughout the year following the January spike.

So what’s the take-home message? The patterns in the data are striking, and we’ve offered some of our own hypotheses. But we’d really like to hear what you think is going on. Please share your insights in the comments section and take our poll on when you prefer to ask for a promotion.

When would you prefer to ask for a promotion?