What Has 300 Moustaches and a Giant Heart? Movember at LinkedIn! [VIDEO]

This impressive total puts LinkedIn in the company of vastly larger organizations including P&G, Shell and GE to name a few, and ahead of the likes of Microsoft, Salesforce.com, EA and interestingly enough the “Freemasons Global Network” which raised over $65,000.

Twelve LinkedIn employees each raised over $1,000 individually with particular shout-outs due to Chicago’s Scott Faraci who clocked in at more than $2,600 and New York’s Ali Mann, our #1 Mo Sista, who raised more than $2,000.

Of course Movember isn’t just about raising money for men’s health initiatives, it’s also about spreading awareness and having fun. From dodgeball and foosball tournaments to beer tastings, bake sales, parties, auctions, photo walls, and even a couple of public head shavings (count on Team Dublin to go all out), LinkedIn teams around the globe embraced Movember with the passion we approach our everyday jobs transforming the way organizations hire, market and sell. It was a proud month for the men and women of LinkedIn, and built the foundation for an even bigger impact next year.

Thank you to everyone who grew, donated, participated, cheered on, and otherwise helped to make LinkedIn’s Movember 2012 the rousing success it was! 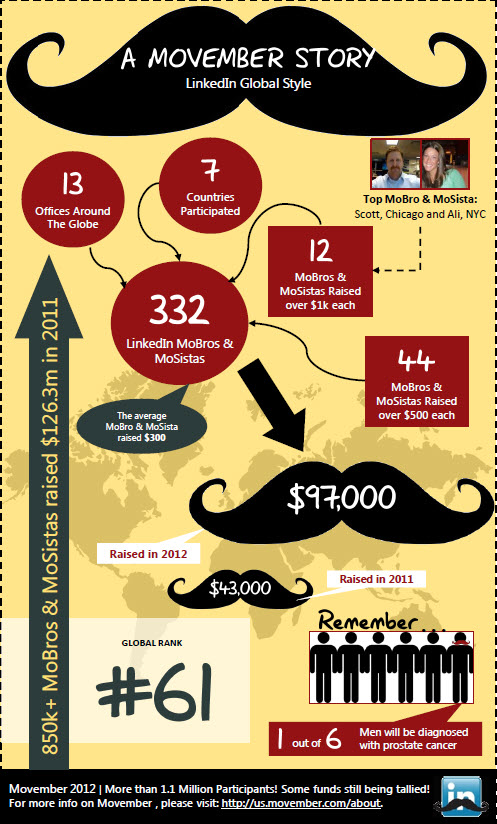