From Prince to King of the Netherlands: 3 Tips for Making the Most of a Promotion 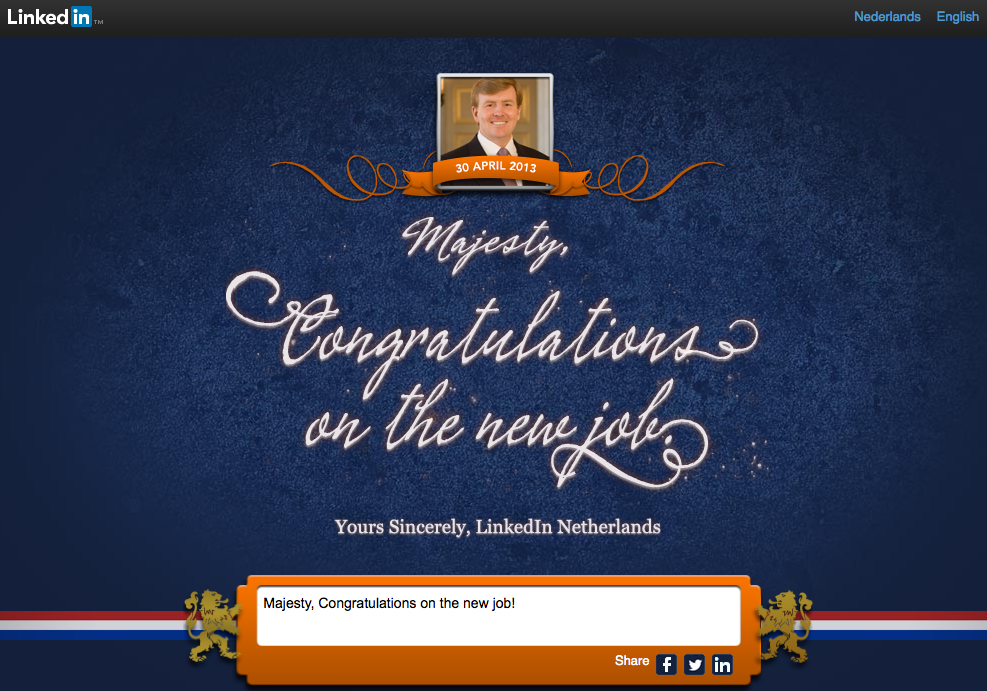 To celebrate this promotion, LinkedIn is giving our members the opportunity to congratulate the new King of the Netherlands and offer him some tips for new job success, just as you do when a connection in your LinkedIn network makes a career move. Like all jobs, it’s not the title that matters most, it's what you do with it. Here are some tips for members on how to start a new job on the right foot:

1. Go beyond your job title
A promotion is something we all look forward to at some point in our careers. However, as flattering and satisfying as it is to have a new, and perhaps well-deserved, job title, there is much more to your promotion than the title itself. In a recent televised interview with Prince Willem-Alexander and his wife, the Princess were quite explicit with her thoughts on the promotion: “it is not about the title, it is about what we represent”. This applies to us all – royalty or not. Your job title is just one of the many ingredients representing your responsibilities and expertise to the outside world. Therefore, it is crucial to showcase all the important elements that contribute to your role.

2. Be specific about what you do
Provide thorough, accurate information by updating your LinkedIn profile with precise details. If you're a King, for instance, be specific about the value you add to the country by highlighting your achievements and the skills you've acquired in the years leading up to your promotion. And most of all, clearly express what you’re passionate about. King of the Netherlands is one thing, but being a symbol of continuity and unity says something more.

3. Let others sing your praises
LinkedIn is a social network after all. Tap into its full power by asking your valuable connections to speak for you. Endorsements and recommendations from your trusted colleagues add an extra layer of value and credibility to your career profile that a new job title may not.

Just as His Majesty should be connected to the people and have his actions (not his title) represent him and the country, so should you represent yourself with your skills and accomplishments, taking your title only as the starting point.

All that said, becoming King is a big deal. Please join me in congratulating the new king on this momentous occasion. And Prince Willem-Alexander, heir apparent and soon-to-be His Majesty King Willem-Alexander, King of the Netherlands, Prince of Orange-Nassau, if you ever need career advice, you know where to find me!