Jeff Bezos and The Everything Store: LinkedIn Speaker Series with Brad Stone

If you were interested in learning more about Amazon.com and its CEO Jeff Bezos before, chances are you’re REALLY interested now. The man behind the world’s biggest online retailer -- who recently took to 60 Minutes to announce plans to have drones deliver our books, diapers, and everything else we order from Amazon -- is the star of the recently published book, “The Everything Store: Jeff Bezos and the Age of Amazon,” written by senior Bloomberg Businessweek writer, Brad Stone.

As part of our LinkedIn Speaker Series, Brad came to LinkedIn headquarters to talk about his attempts to get up close and personal with Jeff Bezos in order to tell the story about his life and the company he’s worked tirelessly to build. My professional relationship with Brad has always placed me on the receiving end of all the hard-hitting questions (me handling Corporate Communications and Brad a reporter), so it was fun to turn the tables and ask him the questions for once. 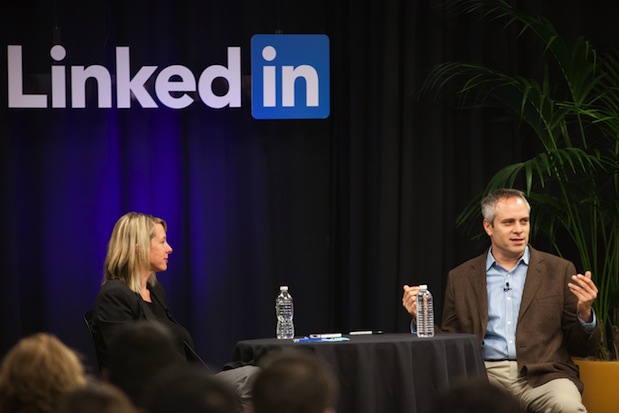 We started things off by confirming a very important aspect - if you’re going to write an entire book about someone, you should pronounce their name correctly. So, say it outloud with me, it’s Jeff “BAY-zos.” Glad we got that straight!

Brad, of course, dug deeper than just name pronunciation for this book. The book is a very detailed look at the type of person and CEO Jeff Bezos is and his incredible rise, and I thought there was a lot LinkedIn could learn from Amazon.com.

During his talk, Brad described Jeff Bezos as “very sci-fi focused,” and after the recent Amazon Prime Air announcement, it’s more than ever a fitting description. The now owner of the Washington Post, and future commander of unmanned air delivery drones, is a fascinating person to say the least, and there are few people more well-positioned than Brad Stone to tell us more about him and the company he’s built. Brad has covered Amazon for more than a decade.

The full video of Brad’s talk is below: