From neurosurgeons turned data scientists to Olympic-caliber marathon runners, LinkedIn attracts a diverse group of uniquely talented employees. But what we saw on-stage at our first annual “LinkedIn’s Got Talent” Competition this year blew us away.

Up against several strong employee musical acts, Jennie Cini and Tim McCarthy, members of the LinkedIn Marketing Solutions team in New York City, stole the show with their soulful performance of Bonnie Bishop and Al Anderson’s song, “Not Cause I Wanted To.”

Jennie’s been singing her entire life, and her country and soul music roots really stand out in her performance. Tim’s a singer, songwriter, and self-taught multi-instrumentalist whose echoes of 60’s and 70’s rock ‘n roll legends rounds out this duo, called Sun Hollow Sun. 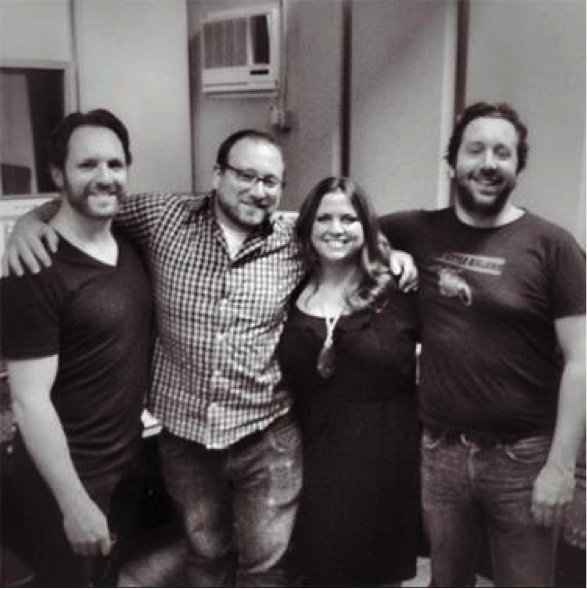 After winning the competition, Jennie and Tim set their sights higher than just recording the Bonnie Bishop and Al Anderson song that brought them together. They set a goal to record a full EP and spent the months that followed playing and writing together.  Once they had their songs together, they used their professional networks on LinkedIn to contact acquaintances and friends in the music industry and began to galvanize them into a musical production team. Response was incredibly positive. Soon they not only had musicians like Randy Schrager (Scissor Sisters) on board, but they were able to record at Fireplace Studios, where bands like the Yeah Yeah Yeahs, Kelly Rowland, Spoon and Peter Bjorn and John have worked. Sweetening the experience was getting two-time Grammy winner Seth Foster on board to master the entire EP.

Tim playing the guitar in the LinkedIn NYC Office[/caption]

On November 11th, Sun Hollow Sun kicked off the release of their album, “No History,” with a packed show at Rockwood Music Hall in New York City. If you missed the show, don’t fret. They were invited back to perform on February 20 and will perform regularly throughout the New York City area next year. Check out their schedule and get their EP at www.sunhollowsun.com.

LinkedIn fosters employees’ professional and personal transformations—supporting and encouraging employees to pursue their dreams. We are excited to follow Jennie and Tim’s music and to see what the next “LinkedIn’s Got Talent” competition reveals.