LinkedIn and MentorNet: A Partnership To Get More Women in STEM

The technology industry is one of the primary growth engines of the economy, and with rapid growth comes demand for skilled workers to fill the increasing number of open positions at various companies within the sector. Despite a high demand for talent, there’s a widening gap within the tech industry in the number of science, technology, engineering, and math (STEM) roles held by women.

For all its accomplishments and innovation, the technology industry is lagging when it comes to representing an equal balance in the workforce among women with technical backgrounds. We had LinkedIn researcher, Sohan Murthy, look into this imbalance and according to LinkedIn data:

This raises an important topic for discussion: if technology will help to define how we work in the future, how can that future be meaningfully realized when women aren’t playing a more significant role in shaping it?

We believe strongly that providing the right support in the form of role models could yield positive results in terms of getting more women in STEM positions, and it could also be an effective measure in balancing out the gender gap. And because we believe further steps need to be taken, today we’re pleased to announce our partnership with MentorNet, a national nonprofit that provides all STEM students with access to high-quality mentoring experiences by connecting them with professionals in their field. Using an online social networking platform, students (called protégés) can build relationships with mentors, connecting across generational, gender, racial, cultural, and socio-economic boundaries.

Our partnership with MentorNet includes a grant to help update their technology platform, which will enable them to scale their impact. It will also allow MentorNet to leverage job postings in order to fill a critical need for great mentors, as the supply of protégés tends to heavily outweigh that of available mentors. Additionally, since the LinkedIn platform enables members to “signal” their interest in doing skill-based volunteering, it will provide MentorNet with the ability to leverage our growing network of 277 million professionals to identify members who might be interested in becoming a mentor and match their subject matter expertise with a willing protégé. To date, more than 600,000 LinkedIn members have indicated their interest in either serving on a board or doing skill-based volunteering.

MentorNet’s CEO, Mary Fernandez, first became involved with the organization as a mentor herself. As a computer scientist, having her own mentor was invaluable in helping her navigate challenges and persist in a tech career. As LinkedIn data indicates, support for MentorNet’s mission couldn’t come at a more critical time, especially within the United States, as female representation among U.S. computer science and software engineering degree holders has declined over the past 30 years. In 1984, 23% of U.S. degree holders were women. As of last year, fewer than 15% were women. Unfortunately, this trend is fairly well documented. 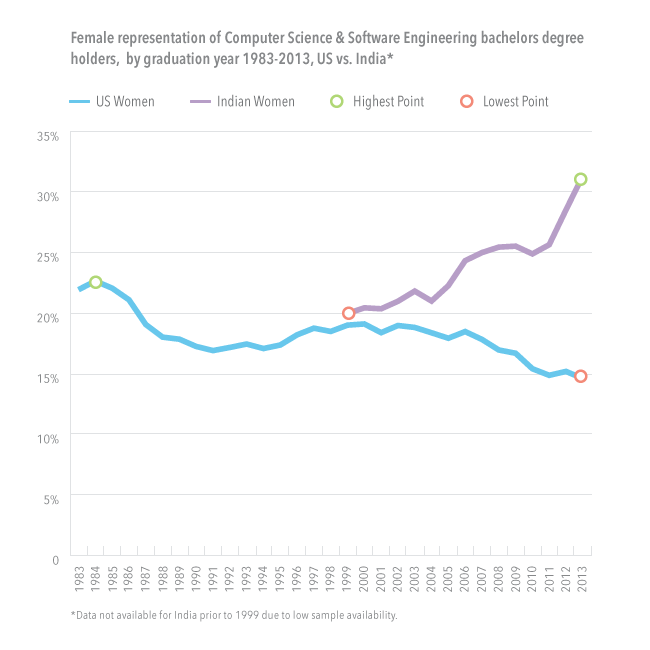 Compare this to India, where female representation has increased dramatically from 20% in 1999 to 31% in 2013. The increase of female computer science and software engineering degree holders in India is so dramatic, that prior to 1999, there weren’t enough members to include in our analysis to provide a robust result. In fact, the overall global trend of female representation is increasing - ever so slightly - due in part to India’s contribution.

These are significant, fundamental challenges, and no single action by one company, entity or even group of companies and entities is going to address all of them. However, we’ve identified an area where we believe we can have significant impact, as it relates to one of our core areas of focus: the power of professional ties and the sharing of knowledge.

Our vision as a company is to create economic opportunity for every member of the global workforce. The development of the Economic Graph and work of organizations like MentorNet will help make that vision a reality by providing real time insights and awareness into the shape and scale of problems like gender inequality in the technology sector.

Keen observers will note that there is no field for gender on the LinkedIn profile. We have inferred the gender of members included in this analysis by classifying first names. Members whose gender could not be inferred based on their first names weren’t included in the analysis.