The Madness is back! Last year, we tried to predict the winner of the NCAA men’s basketball tournament using LinkedIn data, and the results were… questionable, to say the least.

But, no matter. We’re back to give it another shot! Anything is possible in March, and we’re still sticking to our belief that team spirit is what you need most to win a championship.

We ranked each team in the tournament based on how closely their students and alumni were tied to each other and their schools during the basketball season. To determine this, we analyzed how students and alumni connected with each other and followed their universities on LinkedIn, from November 2013 to March 2014. The team with the higher “LinkedIn School Spirit” ranking wins their game and advances in the bracket.

This year, we’re picking the University of North Carolina at Chapel Hill! 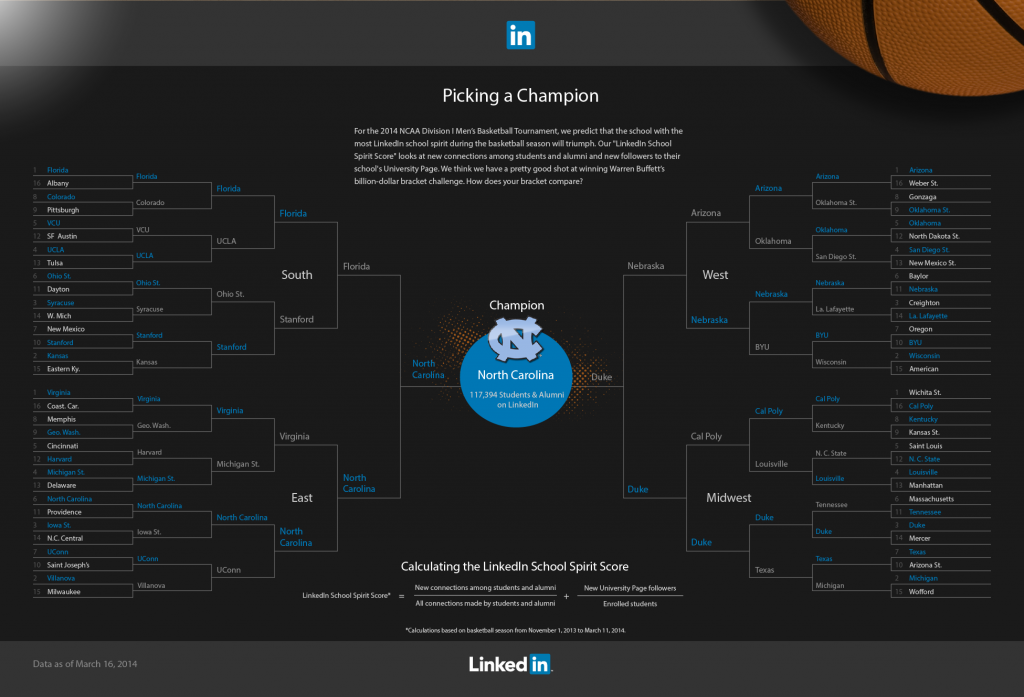 Since the start of the basketball season in November, more than 117,000 Tar Heels connected with each other and followed their school closer than any other team on LinkedIn. Along the way, they’ll upset the top seeded Florida Gators to face their archrivals, Duke University, for the national championship.

Like last year, our bracket has plenty of Cinderella's. Cal-Poly, with their 87,000+ students and alumni on LinkedIn, will beat Texas Southern in the first round, shock the Shockers of Wichita State, then take down Kentucky and Louisville to reach the quarter-finals. Unlikely? Sure. But, our data indicates that Cal-Poly students and alumni are one of the tightest groups on LinkedIn, rivaling many of the larger institutions in the tournament. Meanwhile, 11 seed Nebraska will make it all the way to the semi-finals.

Few things bring fans closer together than college basketball in March. To connect with your fellow students and alumni on LinkedIn, check out our Alumni Tool.

P.S. Are you one of those folks who got roped into an office bracket pool, and don’t have a clue what to do? Check out this bracket randomizer. You’re just a click away from a halfway decent bracket! Need something a little more grounded in reality? Check out the newly relaunched FiveThirtyEight.com and their bracket predictions.

Methodology: First, we ranked every school in the tournament by the percentage of connections made among students and alumni, out of all connections made from November 1, 2013 to March 11, 2014. Then, we ranked every school by the number of followers their University Page gained, divided by their current student enrollment, between November 1, 2013 to March 11, 2014. Finally, we combined the two rankings by giving them equal weight. If our bracket ends up winning you a ton of money in a contest, we think it’s only fair that you split it with us. Or get us some nachos.