State of my Industry: 80+ Influencers on Where Business is Heading [INFOGRAPHIC] 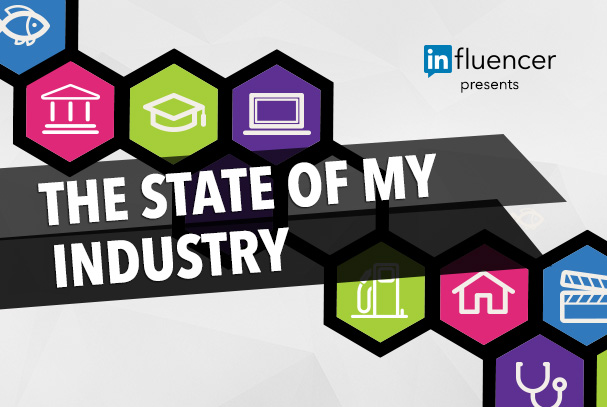 This post is part of a series in which LinkedIn Influencers analyze the state and future of their industry. Read all the posts here.

Not every industry lives under the same sky. In print media or retail, there are whole websites dedicated to adding up layoff announcements. Meanwhile, mobile development or advanced manufacturing are so hungry for talent, you can get a 5-figure bonus just for referring a new hire. Some industries wither and with them the entire cities they built; others you've never heard of became multibillion-dollar activities in a matter of years.

We asked our Influencers – top CEOs, analysts and other thought leaders in all realms of business – to describe the state of their industry, what the present looks like and what the future holds. Their assessments varied from urgent pleas to fervent odes, but they all agreed on one thing: no industry today looks the way it did a decade ago and none will look the same a decade from now. The only constant, as the saying goes, is change.

Technology is the great disruptor. It has, for instance, transformed America's energy outlook. Ten years ago, SunEdison founder Jigar Shah had to bang on doors to convince anyone to install solar panels. Now technological progress has helped solar make economic sense – and Jigar Shah make his point. And "how wrong we were" about peak oil, writes BP Capital chairman and CEO T. Boone Pickens. "With stunning technological advances – chiefly the combination of fracking and horizontal drilling – we now have more energy reserves that any other nation on earth. (...) If you want to blame that industry for anything, blame it for creating too many jobs." (To debate environmental as well as economic consequences, please refer to T. Boone's post.) Jobs abound too in global security and aerospace, according to Marillyn Hewson, chair and CEO of Lockheed Martin. "Mach 6 aircraft that could fly from New York to Tokyo in 90 minutes; lasers straight out of science fiction that could defend our cities; space capsules that will one day take us to asteroids, back to the moon, and to Mars." That's what her industry is working on.

Of course, technology isn't all flying cars and cheap energy. It's also had a profound, sometimes painful impact on business models. "For the average retailer, this disruption looks threatening. Retailers are born and raised to hold a reverence for their physical store," Bill McComb, former CEO of Fifth & Pacific (behind such brands as Kate Spade and Juicy Couture) says of the digital transformation of commerce. In the entertainment business, the recording industry is playing catchup with digital pure players and "needs to speed things up", says Dave Allen, Gang of Four's bass player who has just joined Beats Music. Hollywood studios too had to give up the keys to the kingdom, echoes Peter Guber, CEO of Mandalay Entertainment. And in higher education, it seems all schools can now offer is increasing tuition costs for decreasing salary prospects, argues the economist and academic Tyler Cowen.

But for all these obstacles, McComb, Allen, Guber, Cowen and many others are not pessimistic. "If you choose to ride the wave of change rather than resist it, the opportunity for larger audiences, deeper connections and more robust economic rewards will arise. This is not only true for the entertainment business, but for all industries facing this tsunami of technological change," writes Guber. The key is to get back to the fundamentals, and in business nothing's more fundamental than your customer.

Arne Sorenson calls her Jia. She has just turned 30 and scored her fifth job. "She’s waited to make some big life decisions and isn’t sure she’ll ever decide on one person, one home or, maybe, one brand," writes the Marriott International president and CEO. To please Jia and gain her trust, businesses must refocus on their values and on not just doing good business but also doing business for good. "The optimist in me believes there is another way forward for the banks," writes for instance Sallie Krawcheck, past head of Merrill Lynch and Smith Barney. "And that is to turn their (and capitalism’s) historic 'shareholder first' orientation into 'customer first.'" In education too, customer focus has been lost: there, the "customers" are the kids, StudentsFirst founder Michelle Rhee reminds us – not parents, lawmakers or teachers' unions.

Adapting to this brave new world requires a fundamental culture change for many corporations. Businesses must "simplify or ossify," says GE CEO Jeff Immelt. "Technology is transforming all our processes and there has never been more global competition. We need laser-like market focus to achieve effective customer outcomes. We need to permanently remove costs and eliminate bureaucracy, not just cope with it or move it around." Richard Branson suggests businesses take inspiration from democracies, and democracies from business.

On an individual level, we asked our Influencers too what it took to succeed in those constantly evolving industries. The two words that kept coming up: forward-thinking and adaptability. It's not what you know, it's what you can learn. Start here with industry insight from 80+ of the top minds in business.

State of My Industry: Popular Skills from LinkedIn

Let us learn from you too! What's going on in your industry? Write your own post using the hashtag #myindustry. (Have insight but no access to our publishing platform yet? Request it here.)

Editor's Note: This post was originally published on LinkedIn.