Careers That Will Move You: What It Takes To Work Around The World

At LinkedIn, we have a unique view into how 300 million professionals are moving around the world to pursue career opportunities. This mobility of professional talent can tell us a great deal about the state of economic opportunity and the health of the global economy. So we’re seeking to better understand and map the dynamics of economic indicators as we continue to build the Economic Graph.

To get a big picture view of talent mobility, we analyzed our data to see which countries gained and lost the most talent between November 2012 and November 2013, and what characteristics are shared by those who relocate for their careers.

We measured net inflow and outflow of LinkedIn members for 20 countries where we saw the most migration activity to see which were the overall winners and losers of talent in 2013. 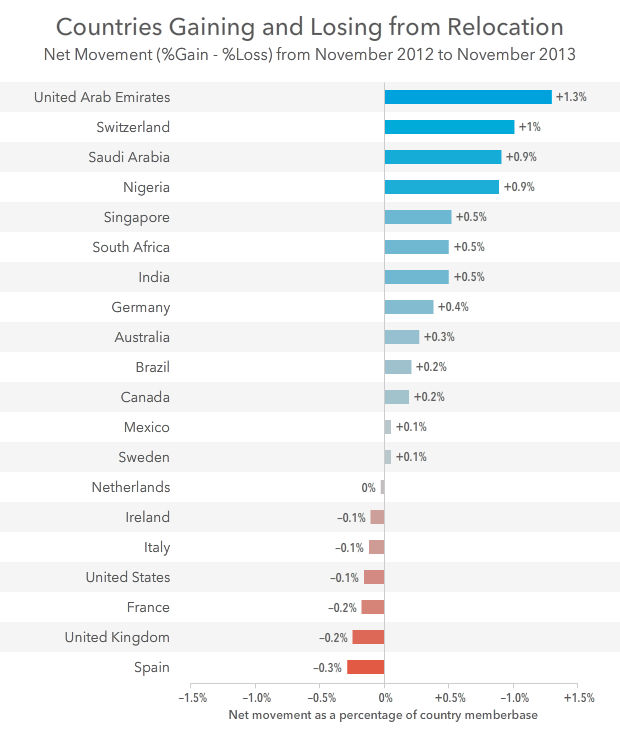 A few highlights stood out to us after digging deeper into specific country data:

Career Traits That Require A Suitcase

Most people would find it easy to conjure up the image of what an international business professional looks like, but what are the common traits among people who are more likely to work internationally? To find out, we looked at a number of characteristics that were most likely to be found among our sample set of movers vs. non-movers.

When we looked at the specific skills listed in the profiles of members who moved, we noticed some skills were twice as likely to be found on the profile of a mover’s compared to a non-mover’s. Below are the top 10 skill categories that were most unique to movers in the past year: 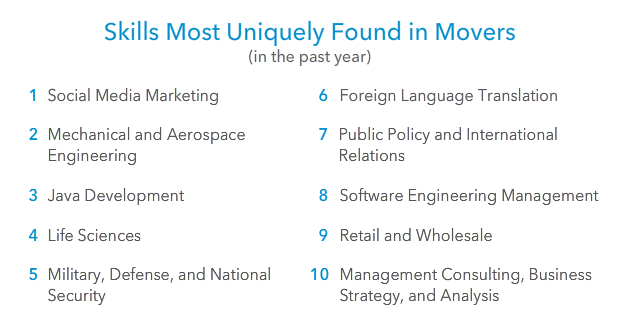 Skills in Science, Technology, Engineering, and Math (STEM) made up nearly half the list (4 out of 10). We also noticed that members who moved in the past year that had STEM skills also tended to travel the furthest distances for their new role, averaging nearly 2,400 miles (3,900 km). So if you’re looking for a career that will allow you to see various cities around the world, you might want to focus your studies in a STEM discipline.

We also looked at the most represented industries by members who moved versus those that didn’t, and found a fairly distinct separation.

Finally, we looked at all of the types of work members did, and compared these various functions found within businesses by their likelihood of having members who moved in the past year.

So, what can we conclude from this? Well, if you want to work all over the world, you might have a strong set of STEM skills, be a social media marketing expert, and/ or aim for business development role in a technology company with offices in the UAE.

In the coming weeks and months we will continue to explore the topic of talent migration, with a focus on areas such as recent graduates, and publish the research here on the LinkedIn blog.

With our feet back on the ground, we’re going to continue looking at these and related themes as we build the Economic Graph, digitally mapping the global economy. It’s our hope that in the near future this information will help all of our members make important life decisions (including whether or not they should make the big move) that puts them on a path to pursuing economic opportunity.

Methodological details: The results of this analysis represent the world as seen through the lens of LinkedIn data. As such, it is influenced by how members chose to use the site, which can vary based on professional, social, and regional culture, as well as overall site availability and accessibility. These variances were not accounted for in the analysis. Additionally, nationality and visa status are not fields included in the LinkedIn profile. Therefore, we cannot make any inferences on the citizenship of our members who were included in this analysis.

Only countries with more than 3,000 members who made a move between November 2012 and November 2013 were included in our ranking. China was specifically excluded from our analysis as our official entry into the country was announced after the time window of our analysis. At the time of the analysis, LinkedIn was only available in English, resulting in multinational corporations being over-represented among members in China, which presented a significant artificial skew in our analysis.

We determined the geographic movements of our members in the last year by looking at every new position that was added to profiles between November 2012 and November 2013, which included a regionally specific location (e.g. “Greater Los Angeles Area”) that differed from the regionally specific location of the previously held position (e.g. “Greater New York City Area”). Next, we excluded movements that did not exceed 100 miles (161 km), based on the direct distance between two geographic coordinates, generalized as the geographic center of each region.