Exploring the Link Between Professional Connections And Economic Opportunity

Earlier this year I joined LinkedIn to lead the company’s public policy and government affairs initiatives and to help LinkedIn achieve its mission of connecting the world’s professionals to make them more productive and successful.

Making a professional connection in some ways is a simple action, but it’s a simple action that can have a profound impact on a person’s education and career. At LinkedIn we’re working on making connections deeper and more meaningful by developing the Economic Graph - a digital map of the global economy.

We believe that the Economic Graph will help amplify the effectiveness and impact of connections by forming ties between people and also among companies, jobs, skills, educational organizations, and professional knowledge. With these broader and deeper connections we believe that individuals and organizations can find and create more economic opportunity, which is one of the biggest defining issues we face today as both governments and the private sector around the world tackle youth employment and other challenging workforce issues.

We’re also working to leverage the Economic Graph to provide more insights on the workforce and the economy, along with making tools available to individuals around the world to help them become more productive and successful. One example of this is a research paper released today. The paper, written by Dr. Michael Mandel and commissioned by LinkedIn, shows connectedness, as measured by the average number of connections among LinkedIn members in various U.S. metropolitan areas, is a factor in job growth. 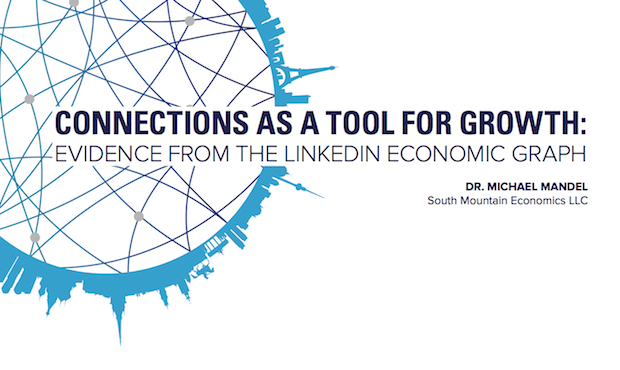 Michael lays out a compelling case for the use of technology and data to help create economic opportunity by building upon connections. The research also suggests the promise of being able to spot, in real-time, the trends of the global economy and then, for example, adapting curricula for community colleges to meet the demands of local companies in need of skilled labor.

You can view and download Michael’s full report in the SlideShare below.