The Road Not Taken: What Would You Be Doing If Life Had Taken a Different Turn? 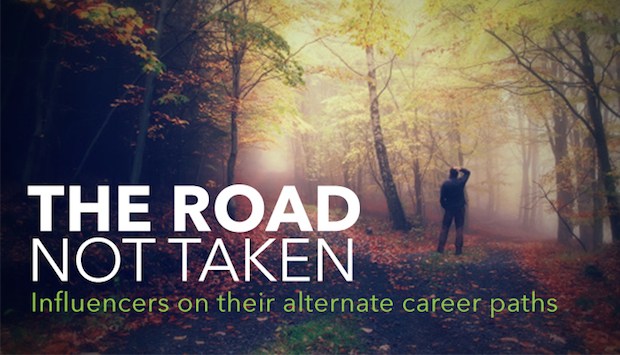 Depending on where you are in your career, those two words have the ability to inspire — or haunt — you.

In this latest series on LinkedIn, “The Road Not Taken,” we asked some of the world’s most successful professionals to explain how their career paths might have turned out differently. From Suze Orman and Deepak Chopra to the World Bank's Jim Kim and General Electric's Beth Comstock, more than 60 Influencers chimed in with inspiring tales and reflections of what might've been. In some cases, as with Randi Zuckerberg, Influencers also revealed what's on the horizon.

Tell us: What would you be doing if you had chosen another path? Or if you've already switched gears, tell us about the pivotal moment that altered your journey. Write your own post; include the hashtag #RoadNotTaken in the body of your post so we can find your great stories.

Read on to find out what might've been for Suze Orman, Shark Tank's Kevin O'Leary, MSNBC’s Mika Brzezinski, and others.

Some careers are made by turning misfortune into opportunity.

Before Suze Orman became “the Money Lady,” she worked as a waitress who aspired to open a neighborhood restaurant. In an amazing display of generosity, Orman's loyal customers rallied behind her: "When [Fred, a beloved customer] finished his breakfast, he didn’t just leave a tip. He gave me a $2,000 check and commitments from other diners/friends that totaled $50,000 (the equivalent of nearly $150,000 today) along with a note:

My own Kickstarter campaign, circa 1979!"

In fact, Orman might have become a restaurateur if not for a critical turn of events — she lost the $50,000 in a bad investment. The setback, Orman writes, helped launch "a new career passion: helping people take control of their financial lives."

Some career signals are too obvious to ignore.

As a teenager, Shark Tank’s Kevin O’Leary worked at an ice cream parlor. One day, his boss ordered him to scrape gum off the floor. "That’s not my job," I said. "My job’s to scoop ice cream." Next thing out of my boss's mouth was: "You’re fired. Get out of my store."

This early experience was all the inspiration O'Leary needed to become his own boss.

Other epiphanies can take years to crystallize.

Though Randi Zuckerberg loved to sing, she abandoned her love of singing for more "professional" endeavors at Facebook. "I learned quickly that in the corporate world, it’s 'distracting' for women to have side interests, aside from work and family – and that if I wanted to be taken seriously in my career, I would need to shelve my passion for performing," Zuckerberg writes.

Some career-defining moments are near misses.

In the early career days of GE’s CMO Beth Comstock, she was almost passed over for a prime job at NBC because she hesitated to apply. She writes: "With the job still empty after six months (half a year!), I finally mustered the confidence to march into the HR leader’s office and ask why I hadn’t been considered. 'We didn’t know you were interested,' he said."

Comstock’s what-might’ve-been saga doesn’t end there. Years later, she continued to battle low self-confidence. Her turning point? Her boss, Jeff Immelt, said: "'I need you to be more confident.'"... I remember thinking, 'He has found me out.'"

Other career crises may feel as if the universe is conspiring against you.

MSNBC’s Mika Brzezinski describes getting fired from CBS as an “out-of-body experience. I sent my work to other networks and the response was… crickets. I went from everything to everyone to nothing to no one.”

As her severance pay and job prospects dwindled, Brzezinski reluctantly broadened her job search: "I'll never forget the moment. Driving my pickup up the hill near my house, the '93 Ford 150 with roll-up windows just stopped… Stalled out and died. I knew that meant another $500 at the shop. $500 that I did not have. Then my cell phone rings. It's the PR firm. Wanting to know if I can come in this week…"

Should she leap at the much-needed job opportunity? Or should she stay the course?

And some careers are defined by taking a gamble.

Before Sam Shank co-founded HotelTonight, he was an aspiring Hollywood filmmaker who moonlighted as director Wes Craven's assistant. "There was too much luck involved in advancing in Hollywood, and not enough ability to control one’s own destiny," Shank writes. "When I was ready to start my own company, I was able to do it for under $250K, a budget that would have been really tough to make a film with."

But whether reflecting on the road not taken brings angst or clarity, it’s what you do next that matters.

As Peter Guber (CEO of Mandalay Entertainment, owner of the Golden State Warriors and Los Angeles Dodgers) has discovered, "[i]t is far more productive to analyze your decision-making process — how and why you make your calculations – not the result."

In the coming days, don't miss these other "The Road Not Taken" stories, and more:

Your Turn: If life had taken a different turn and you weren’t in your role today, where would you be? What would you be doing instead? Or if you've already changed directions, tell us about the pivotal moment that altered your path.

Write your own post; be sure to include the hashtag #RoadNotTaken in the body of your post so we can find your great stories.

Road Not Taken: Influencers on Their Alternate Paths [INFOGRAPHIC] from LinkedIn