The 25 Hottest Skills That Got People Hired in 2014

Believe it or not, 2014 is almost over and 2015 is right around the corner. With a new year comes new opportunities, and around this time we at LinkedIn are typically asked the following question: “Who’s getting hired and what are they doing?”

To get to an answer, we analyzed the skills and experience data in over 330 million LinkedIn member profiles. If your skills fit one of the categories below, there’s a good chance you either started a new job, garnered the interest of a recruiter in the past year, or won new clients. 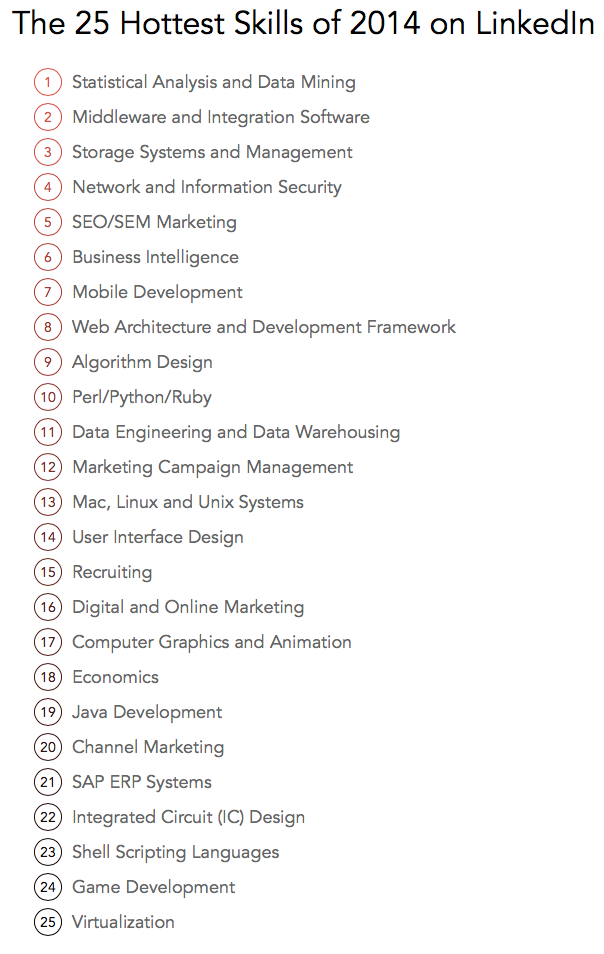 In addition, we took at look at the top skills in several countries including Australia, Brazil, Canada, France, India, the Netherlands, South Africa, United Arab Emirates, the United Kingdom, and the United States. Each country's top 25 skills are included in a SlideShare below. A few skills trends stood out to us when we reviewed the results.

As we continue to develop the Economic Graph, a digital representation of the global economy, we hope to empower our members by helping them make better career decisions, get new jobs, grow their business, and achieve economic opportunity. Be the first to get all of our latest news and original research by visiting: LinkedIn Economic Graph.

Because there are thousands of individual skills (and growing!) that members can put on their profile, our first step was to group these skills into several dozen categories. For example, skills like “Android” and “iOS” would fit under the “Mobile Development” category. From there, we looked at all of the hiring and recruiting activity that happened on LinkedIn in the past year (January 1 to December 1, 2014), and identified the skill categories that belonged to members who were more likely to start new jobs and receive interest from recruiters.

It should be noted that we made significant changes to our approach compared to last year. Specifically, we put more weight on recruiter interest, and segmented our results by country. As such, the rankings for 2014 are not comparable to 2013.