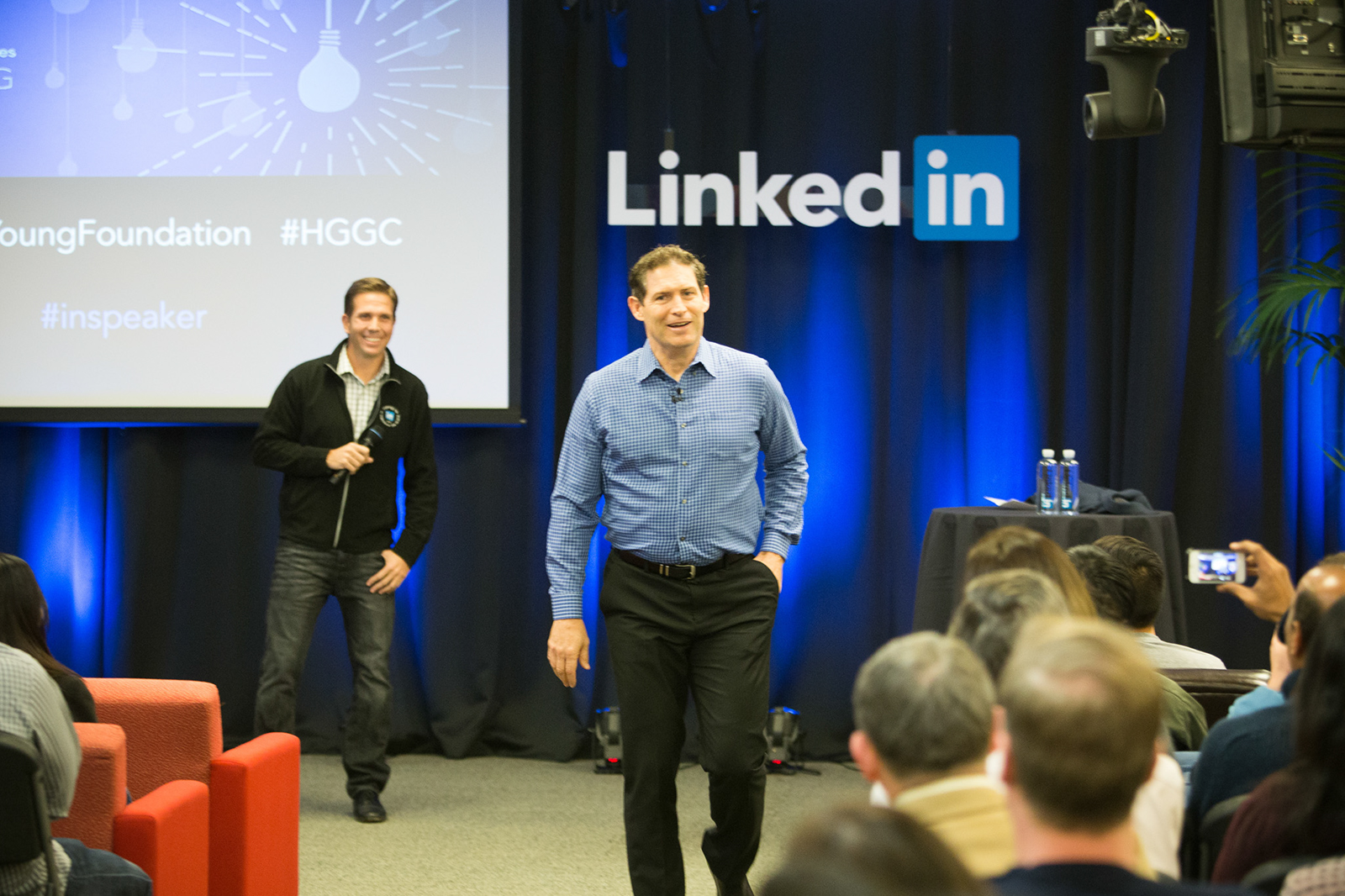 On January 29, 1995, the San Francisco 49ers walked out of the locker room at Joe Robbie Stadium in Miami, Florida to face the San Diego Chargers in Super Bowl XXIX. It didn’t take long for the 49ers, led by Steve Young, to stake their claim as the better team by scoring two touchdowns within five minutes and going on to win with a final score of 49-26.

While the Super Bowl was the sporting event of the year and a continuation of 49er dominance in the NFL, for Steve, it was the culmination of a personal journey that included learning to throw blind, holding himself and the team accountable, and finding his next play.

Earlier this month, Steve came to LinkedIn to talk to our employees about that journey - here’s what I took from it:

Steve is shorter than most great quarterbacks. If you look at his NFL player card it says he is 6’2” but he is probably closer to 6’0” or 6’1”. Other great quarterbacks like Tom Brady and Peyton Manning are 6’5”. Due to being a ‘vertically challenged’ quarterback up against a wall of very tall offensive lineman, Steve found himself faced with a very real problem - he couldn’t see.

Because he couldn’t see, he couldn’t throw. And because he couldn’t throw, the offense couldn’t move in typical 49er style. In his struggle to find the solution (even trying to add padding in his shoes to make him taller), Steve realized that he knew his teammates and the routes they ran so well that he didn’t have to actually see them in order to get the ball to them. In other words, he was throwing blind. This innovative solution to a very difficult problem led Steve to become the highest rated NFL quarterback of all time.

Holding Himself and the Team Accountable

The year Steve took over the quarterback duties for the 49ers, things didn’t go as well as he had hoped. After a failed play, Steve would explain very clearly what happened – and it was rarely his fault. Either the ball was muddy, a block was missed - allowing a player from the other team to hit him as he threw the ball, the receiver turned the wrong way, among myriad other reasons. Despite his very clear explanation about the reasons for the failure, his team would head to the sidelines and, when the coach would ask what happened, the responses varied but they may as well have all been the same: “Well, he’s not Joe Montana.” Steve was consistently compared to his predecessor, Joe Montana, who had won four Super Bowls with the 49ers.

Then one day on a flight from Salt Lake City, Steve sat next to and received some poignant advice from Stephen R. Covey, author of the best-selling book “The Seven Habits of Highly Effective People.” This advice helped Steve see accountability and teamwork in a completely different way. He went back to his team and instead of explaining what went wrong he understood that “the ball was in my hand and now it’s in [the other team’s] hand. It’s my fault. I did it. But I’ll tell you what we’re going to do: We’re going to go to the sidelines, we’ll get a drink of water, we’ll rest up, we’ll come back on the field, and we’ll go down and win the game. What do you say?”

Finding His Next Play

After winning and being named MVP of Super Bowl XXIX, Steve, like other Super Bowl MVP’s before him, announced to the world that he was going to Disneyland. Little did he know, he was actually going to Disneyland. The very next day, he was standing next to Mickey Mouse on a float on Main Street Disneyland. Steve was completely caught up in the euphoric moment as praise was being heaped on him from the bystanders. When the float turned the corner and the moment was fading into memory, Steve saw two little boys dressed alike staring at the float. The little boys’ eyes were big and with looks of awe on their faces - as Steve expected one last moment of praise, the younger of the two yelled in awe “Mickey Mouse!” Then his brother pulled him back and said, “You can’t get near him, the big guy won’t let you.” In the blink of an eye, Steve went from national hero to Mickey Mouse’s bodyguard.

The point of Steve’s story was for everyone to remember that while big goals are an important part of being successful in life, it is important to remember that life goes on after attaining that goal. We all have to transition to our next play. Steve successfully transitioned to his next play in private equity where he is now co-founder and managing director of Huntsman Gay Global Capital - a firm with over $1.1 billion under active management. He also founded the Forever Young Foundation, an organization that serves children with physical, emotional, and financial difficulties.

Steve’s personable style and behind the scenes insight into his personal journey as NFL MVP father made this speaker series especially meaningful for me.