It’s May and thousands of MBA students are eagerly waiting for their summer internships to kick off. The time between first and second year is the only internship opportunity for most full time MBA students. It’s a critical chance to test out a new company and demonstrate newly developed competencies. It’s a two-way interview for companies to impress students and students to impress prospective employers.

For those who complete their summer internships with a full-time offer in hand, the second year is an opportunity to explore and drive passions. For others, the recruiting game starts anew -  interviews and networking continue, and the stakes are even higher as full-time job seekers.

As MBA students prepare for their summer internship, we examined the internship outcomes from thousands of MBA students who interned in 2013, graduated in 2014, and attended one of the top 50 business schools. Here’s our advice to all you MBA students, based on what we learned:

Many companies hire only a portion of their MBA internship class. 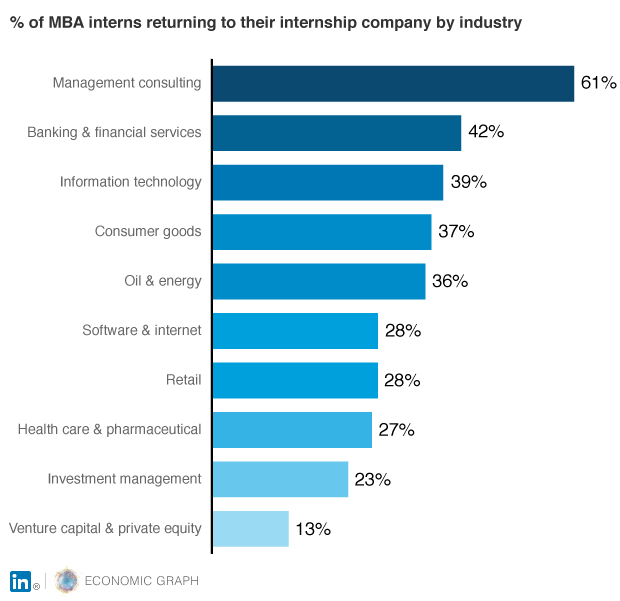 Relationships matter. Interns who connected with 20+ colleagues in the same year as their internships were more than twice as likely to return full-time in 2014. These connections are often the byproduct of informal lunches or coffee meetings to learn about a coworker’s backgrounds and hobbies. Networking makes you memorable to senior leaders as well as a go-to resource for your peers. Seek out a network of peers and informal mentors over the summer. Follow up with a personalized LinkedIn invite to keep in touch. 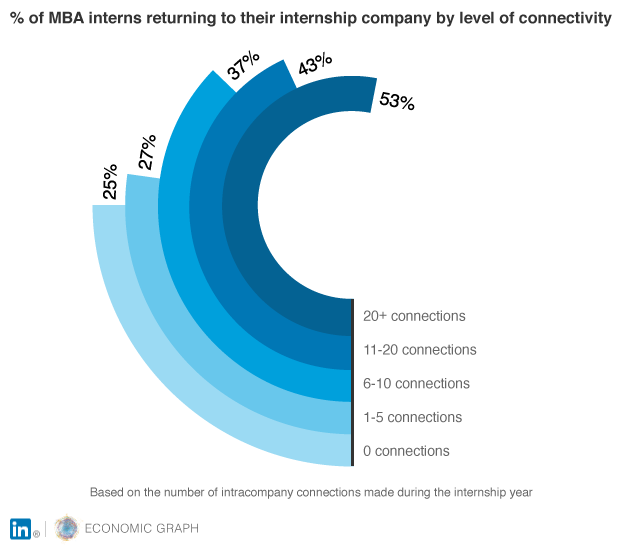 If You’re Not Happy, Don’t Settle

While it’s tempting to accept any internship offer, reflect on your career goals and make sure the opportunity is right for you. Interns who did not build strong networks, evidenced by having fewer than 10 company connections, were twice as likely to leave in the full-time roles as interns who built more relationships (10+ connections). If you receive a full-time offer, ask yourself: Did I enjoy working with the people that I met this summer? If you are not certain, carefully evaluate your options before making a decision. 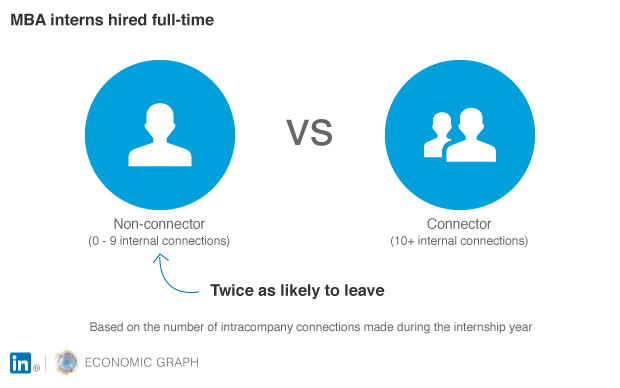 This data shows the importance of setting objectives for your internship experience, creating a strong support network to understand your fit within the organization, and ultimately putting yourself in a better position at the end of the summer. We hope these insights from the Economic Graph help you prepare for your internship this summer.

We identified every member with an MBA degree who graduated between April and October 2014, and attended one of the top 50 MBA programs as ranked by the Financial Times. We then isolated the members with internships in Summer 2013, comparing the internship company to the company worked at in 2014. Those who remained at their internship company in 2014 are classified as “converted” to full-time. To understand networking behavior, we calculated the number of intracompany connections made by each intern in 2013 (including before or after their internship). Lastly, we calculated the survival rate of interns by dividing the number of converted interns who left their company by the total converted interns for both highly connected members (10+ intracompany connections) and less-connected members (0-9 connections).