We are uniquely positioned, by virtue of LinkedIn's data, to provide insight into gender equality across every industry represented on the network. In fact, one of the winning teams of the LinkedIn Economic Graph Challenge is currently working on research that evaluates gender differences in self-promotion on profiles.

Having released our own workforce diversity numbers and an update on our Women In Tech (WIT) and Women’s Initiative (WiN) efforts last week, and with diversity and inclusion continuing to be an important issue across fields, we decided to take a look at gender parity across several industries. We analyzed millions of profiles and compared female representation across a dozen industry groups - with a detailed look at leadership positions and software engineers. Industry leaders can use this data as a benchmark to measure their progress towards achieving gender equality in the workplace. 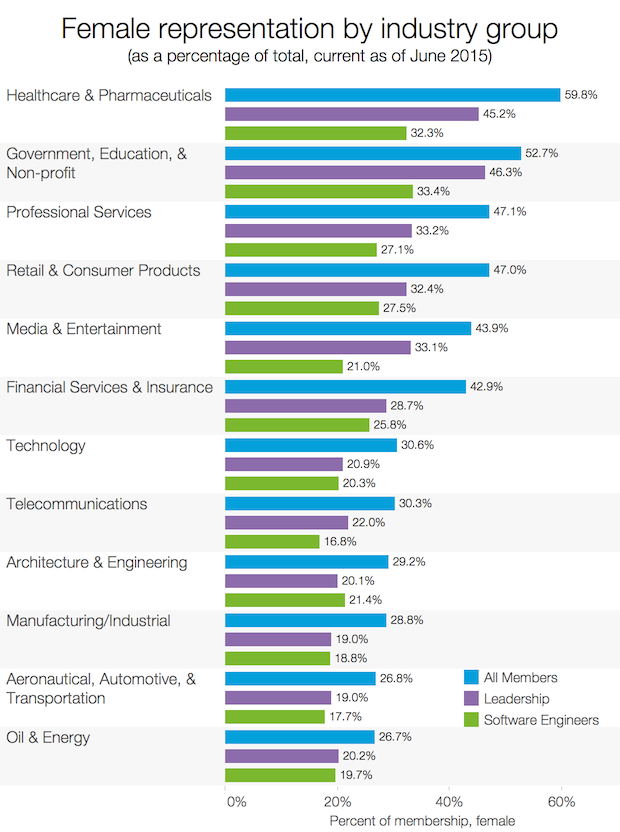 Technology companies are generally considered to be some of the most sought-after employers in the world. We have an inherent “home field advantage” when it comes to recruiting the largest and richest talent pools of our most critical position: software engineers. However, despite this advantage, our data indicates that software engineering teams in tech have proportionally fewer women than several non-tech industries; namely healthcare, retail, government, education, and nonprofits. For example, a typical software engineering team in a healthcare company is likely to be 32% women, compared to 20% in technology. While these non-tech industries employ significantly fewer software engineers versus technology, their teams tend to exhibit greater gender parity.

We noticed significant variance within the technology, financial services and insurance industries. Below, we broke out the technology group into its twelve component industries represented on LinkedIn. 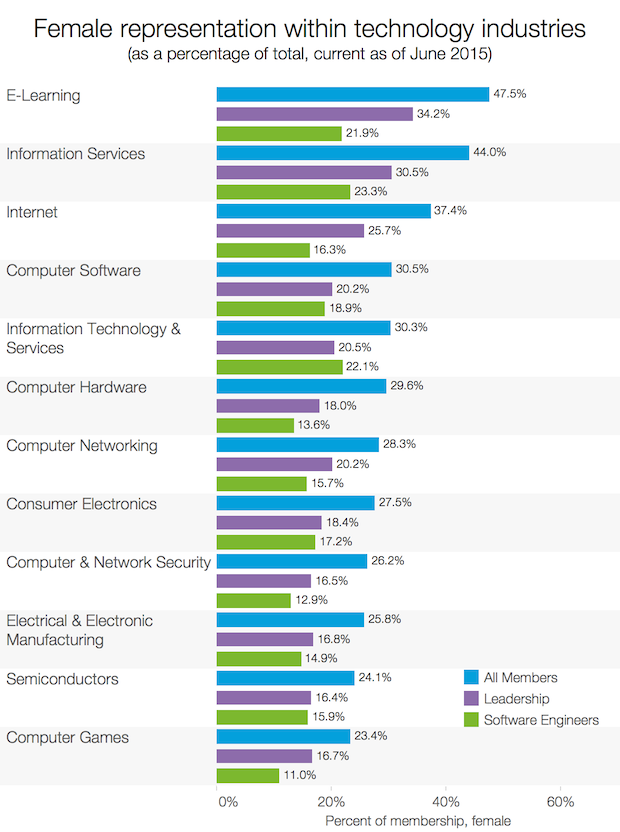 Companies that operate in e-learning and information services industries have the most gender equal workforces within our technology group. However, even among these relatively inclusive tech industries, women are still significantly underrepresented within software engineering roles.

Below, we broke out the financial services and insurance group into its nine component industries represented on LinkedIn. 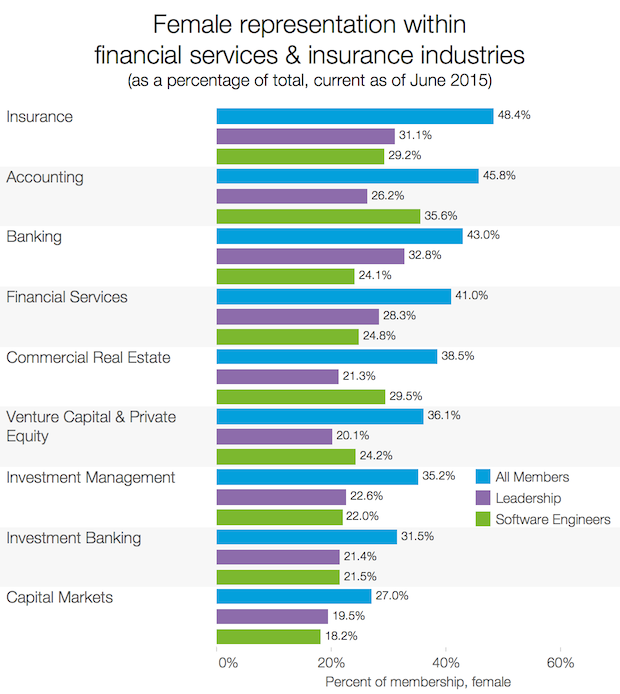 As we noted above, there is a significant leadership gap in these industries. Accounting, insurance, commercial real estate, and venture capital all have gaps of 16% or more. In accounting firms, women represent nearly half of the total employee base, but only 26% of leadership. The three industries that employ the most software engineers - financial services, insurance, and banking - all tend to include proportionally more women than each of the technology industries we looked at.

As we continue to build the Economic Graph, a digital representation of the global economy, we want to create more transparency for issues like gender diversity by drawing insights from our data, allowing business leaders and members alike to make better informed decisions that ultimately create economic opportunity.

Keen observers will note that there is no field for gender on the LinkedIn profile. We have inferred the gender of members included in this analysis by classifying their first names as either male or female. Members whose gender could not be inferred from their first names weren’t included in the analysis. Additionally, we excluded all members in countries where less than 67% of the respective member base could be classified as either male or female, to account for coverage lapses in our gender classifier.