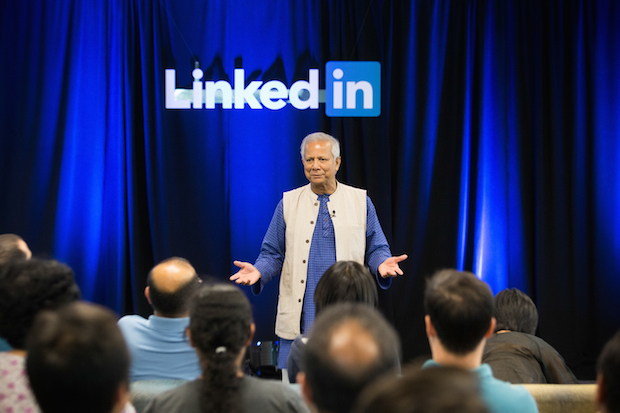 LinkedIn recently had the honor of hosting Nobel Peace Prize recipient, Professor Muhammad Yunus, at our LinkedIn Speaker Series. Professor Yunus delivered an inspiring talk on his experiences empowering impoverished entrepreneurs through microcredit and microfinance -- a topic that closely aligns with LinkedIn’s vision of creating economic opportunity for every member of the global workforce.

The Accidental Entrepreneur
Professor Yunus never intended to become an entrepreneur, let alone start a bank. But it all started with him providing tiny loans to people who normally wouldn’t get one. While teaching economics in Bangladesh in 1974, he saw the struggle first-hand when people simply couldn’t escape poverty or get loans to start businesses, except from loan sharks. He wanted to help and decided to lend to people that desperately needed money. He soon realized that this solution wouldn't scale and decided to help people get loans from banks by serving as the loan guarantee. As the loan amounts increased, banks became hesitant, so he took the matter into his own hands and started a bank himself. The Grameen Bank was thus born.

Unconventional Banking Model, Incredible Impact
I found it interesting to hear that the Grameen Bank goes against the conventional bank model, providing micro-loans to the impoverished without requiring collateral. Today, the bank has 8.5M borrowers across 80,000 villages in Bangladesh, 97% of whom are women. It lends $1.5 billion every year in loans with no collateral, with an impressive 98%+ loan repayment rate. Yunus highlighted other key differences from conventional banks: The Grameen Bank lends to groups of people consisting of (mostly) women based on trust, operates primarily in villages, and believes that “banks should go to people” instead of “people going to banks”. The bank is owned by the borrowers so that any profits are returned to them.

According to Yunus, it is not enough to identify and evaluate the financial needs of the poorest people in a neighborhood, but the most important and challenging task is developing confidence in them so that they can borrow and start successful businesses. By reaching out to the people in the villages, the bank develops personal relationships, and provides guidance on forming groups and starting businesses. Quite often, the financial needs coexist with other pressing needs such as nutrition, health care, and skill development. Consequently, the bank has diversified by forming social businesses to address such challenges. It successfully operates several eye care hospitals to treat cataracts, which are widely prevalent amongst the impoverished in Bangladesh. It also forms joint ventures with large corporations to address social problems, including high-risk pregnancies and malnutrition in children.

The impact Yunus and the Grameen Bank have had on people’s lives is truly incredible.

“Think and Act Like Job Creators”
Another area that Yunus is passionate about is creating a world without unemployment. He believes that we can create that world by encouraging the youth to think and act like job creators. He worries that today’s youth is only focused on seeking salaried jobs, rather than being able to think from an entrepreneurial perspective. This is especially a problem since the number of salaried jobs available has not kept pace with the demand in regions such as Bangladesh.

“A job is an old-fashioned idea from the twentieth century,” states Yunus. He believes that the popular idea of jobs did not exist until after the industrial revolution (with the arrival of current education system). To encourage the second generation of Grameen Bank loan-seekers to be entrepreneurial, he tells them, “How did your mother manage to create a business with just $20 or $30 although she was illiterate, and no one was willing to trust her? Why do you hesitate to start a business when you have an in-house business consultant with 20+ years of experience?”

After listening to Yunus’ talk, I have been asking myself: how can we help empower and create educational and economic opportunities for the everyone in the world? What can technology platforms, like LinkedIn, do to help address labor market inefficiencies and create a world without unemployment? Broadly, what can technology and social/professional networks do to democratize access to information about economic opportunities, and educate and train the workforce for jobs of the future? I would love to hear your thoughts.