More than 1 Million Members are now Publishing on LinkedIn 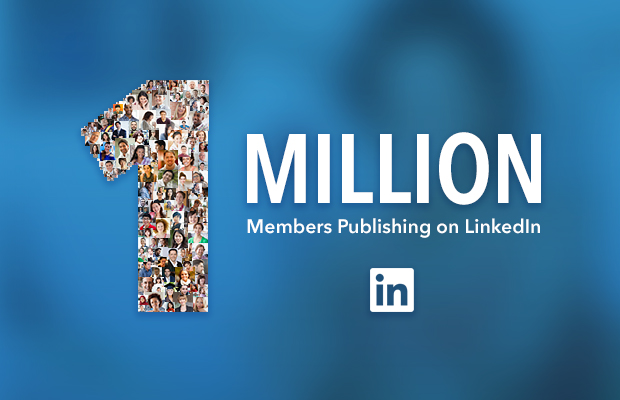 We just crossed 1 million publishers on LinkedIn. Here’s what we’ve learned about why you keep posting.

We just reached an incredible milestone for the LinkedIn publishing platform: 1 million professionals have now written a post on LinkedIn. They’ve used the platform to discuss the future of work, the state of their industries, what companies are getting it right and which aren’t and how the professional world can be a better place.

Since our earliest prototype, our goal was always to find a way to unlock the incredible insights stuck in the brains and cubicles of professionals like you. We wanted to make it easy for your ideas or lessons — or even just the start of one — to quickly spark a conversation that leaps silos, companies, industries, even countries. We wanted insight to turn into conversations that make an impact.

It worked. Want a good example? Follow Sara Sherwani, our 1 millionth publisher. Sherwani, a service designer at Telefonica in London, had attended the One Young World conference, a gathering of young creative global minds designed to drive lasting changes, and decided to share the lessons with more than just the 1,000 attendees. In her first post, she writes about what happens when you see inspiration from around the world, when you’re forced to think bigger about what you can change. “What's stopping you?” she asks.

I can tell you: fear. I still remember the late night in the fall of 2012 when we were just about to launch the ability to write on LinkedIn. We were a small team of editors, engineers, product managers, marketers and designers in Mountain View, California and NYC. I was sharing a cab across the Manhattan Bridge with a colleague and we both started rehearsing worst-case scenarios: The hand-picked 150 people we were launching with — the Influencers — would write once, but never return. They’d copy-and-paste press releases or old speeches, content that satisfied them but didn’t engage the professional world. Readers would ignore it. In a few hours, we’d find out if were really launching what we hoped we were: a platform that would be the first place professionals go to explain and debate their world. Because we promised the Influencers they’d have an immediate impact, we couldn’t launch this to just a small test group of members — or normal process. We had to go big.

Three years later — and with publishing now available to all English speaking members and, soon, every language — we know what that best case looks like.

First the numbers: Our over 1 million unique publishers publish more than 130,000 posts a week on LinkedIn. About 45% of readers are in the upper ranks of their industries: managers, VPs, CEOs, etc. The top content-demanding industries are tech, financial services and higher education. The average post now reaches professionals in 21 industries and 9 countries.

Even more interesting are the stories. We’ve heard from major book publishers like Simon & Schuster who see spikes in sales every time their business authors write on LinkedIn. We’ve heard from people who are new to blog writing who can’t believe what they see. Julie Rottenberg, the former Sex and the City writer who is now show runner on Bravo’s new comedy, Odd Mom Out, wrote a post about her path to achieving her own show. It garnered 68,000 views and an amazing 178 comments from real, identifiable people (many of whom said they were immediately setting their DVRs). “The overwhelmingly positive response has been so heartening — and shocking, given the state of most comments online,” she said.

Rottenberg is working on her next post. Many publishers have found that achieving a regular cadence is helping them expand their reach.

Stephen Frey is an architect based in Montpelier, VT. His pieces on design trends in the workplace have been picked up by regional papers and have opened up doors — including a meeting with a chancellor of an important local college — that have led to new business and deeper discussions. After every initial meeting with a potential client, Frey sends 2-3 of his LinkedIn posts that flesh out what they had just discussed. And something I love: He says the process of getting his thoughts on the screen has helped him better understand how and what he thinks, which carries over into speeches, coffees and beyond. It’s helping him gain business and be better at business. I’m now a follower (and you should be, too!).

Or check out Jeff Morgan, president of Morgan Miller Plumbing in Kansas City. He says his posts (read them here) lead to one new client a week. “Once you begin to participate, professionals on LinkedIn do the rest,” he says. “Soon people are checking you out, asking you questions, getting advice.” A lot of writers like Jeff have come to see this is an investment, not a quick solution. “You must participate, you must read others articles, like others posts, let them know you are out there thinking of them. It cannot be just about you and what you'd like to say. Sure that is part of it, but ONLY part of it.” In other words, just producing content won’t be enough; the best posters are starting conversations.

With more than 1 million professionals now posting, I could go on endlessly with examples. Instead, I asked the editors to pick some of their recent favorite member posts. I hope this gives you some new ideas, new people to follow and maybe sparks some posts of your own.

If you’re writing on LinkedIn or interested in starting, join the Writing on LinkedIn Group, which is full of good advice (and check out my post with tips on how to succeed here). As Sara Sherwani said: “What’s stopping you?”