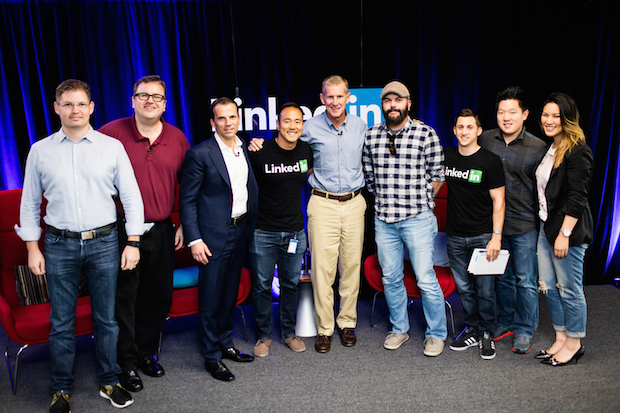 Change is a hard to accept, let alone enact. This is especially true when you have to change an industrial mindset that has established and maintained its rigid structure for centuries. It requires painful introspection, grueling self-reflection, and salesmanship to convince others of your discovery. But most of all, it requires a leader to step forward. Between 2003-2008, General Stanley McChrystal served as the commander the Joint Special Operations Command (JSOC), an organization encompassing the US military’s most elite units. Facing an unorganized, chaotic enemy the traditional military wasn’t trained to engage, McChrystal was forced to be this leader.

On August 20, McChrystal and his co-author, former Navy SEAL Team 6 member Chris Fussell, joined LinkedIn’s co-founder Reid Hoffman to discuss this process of adapting to a new environment as expressed in their new book, Team of Teams. The beauty of McChrystal’s experience in Iraq lies in his applicable ideals. His thought-process in Iraq mirrors the same ingenuity, preparedness, and readiness to adapt as the most innovative and successful companies in our industry. As Reid stated, “You have to be constantly reinventing yourself and investing in the future.” Such is true about tech, and such is true about fighting a war.

Although hard to imagine, McChrystal and Fussell conveyed important values that transcend industry, company, and function. The following three lessons from the LinkedIn Speaker Series resonated with me profoundly:

McChrystal could only describe the US military as “excellent.” Yet, he realized being excellent at one’s job and even winning every battle doesn’t necessarily result in winning the war. As McChrystal recounts, the most elite units in the world were winning, but the team was losing. “Each of our teams was excellent…but I see we are losing.”

McChrystal reflected, “[The teams] are working, but cumulatively they are not.” He and Fussell understood that success required a conceptual understanding of the bigger picture, and even if intermediary steps were proving to be successful, the larger, strategic goal is all that matters.

Connectivity is pivotal to foster teamwork

McChrystal realized he had to change the communicative interaction between the seemingly siloed teams spread across the globe. He enacted a mandatory daily video conference between all the teams so they could understand the bigger picture during the war.

In essence, this is the same technique technology companies employ. Company “All-Hands” meetings unite employees all over the globe to alert them of the company’s goals, strategic plans, and a project’s progress. Just as our CEO Jeff Weiner conveys his vision in LinkedIn’s meetings, McChrystal established an outlet for each deployed team to understand the chaotic atmosphere in Iraq. It also allowed each team to understand the role they played on the global stage and learn from the entrepreneurial thinking and insights of others. This network connectivity proved to be an invaluable tool in the war as it proves to be invaluable in our industry.

Good leadership is ultimately the essential seed that breeds success

An understanding of the need for change is important, but it ultimately requires leadership to enact it. Technology and network connections are merely ingredients to achieve success, but leadership is the driving force that uses those tools. As McChrystal advises, “You have to use the digital tools you have to inspire and to instruct.” Sometimes, the biggest leadership step to undertake is simply committing the idea that you need to change. McChrystal freely admits, “I didn’t know what we had to change to, I simply knew that the status quo was failing.” Essentially, when you’re failing, any decision to change is a good decision.

McChrystal and Fussell’s remarkable insights demonstrate that value can be derived from even the most chaotic and seemingly unrelated scenarios. Through thorough analysis, self-questioning, and action-oriented leadership, McChrystal rearranged the traditional structure of the US military’s Special Ops units to make them more efficient. Ultimately, we must ask ourselves in everything we do, “Are we succeeding in our mission?” And if not, we mustn’t be afraid to change even the most well-established norms.