Introducing LinkedIn Next Wave: Top Professionals 35 and Under Changing the Way We Do Business 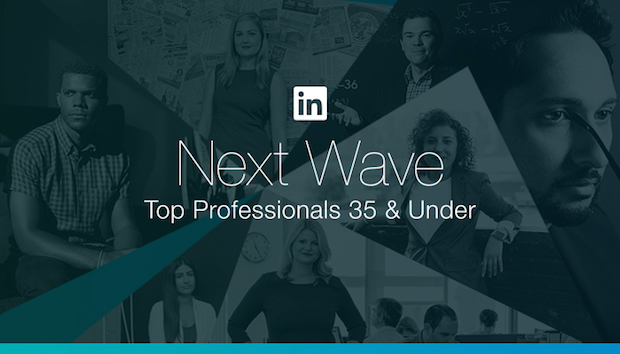 Today's entrepreneurs, inventors and company builders don't fit a stereotype. They don't come from similar backgrounds. And they may not even be names you’ve heard of before. But what they do have in common is that their brilliant ideas, and their drive to succeed have landed them on the very first LinkedIn List — a new quarterly series celebrating professionals and companies that are doing extraordinary work and transforming their fields.

We're proud to elevate these business luminaries among us and introduce you to the LinkedIn Next Wave: Top Professionals 35 and Under.

Who are the Next Wavers? You’ll find everyone from Maura McCarthy, a former venture capitalist who is  reigniting the allure of prefab homes, to Chris Valasek, the security researcher who hacked into a Jeep to reveal security flaws — and just got hired by Uber. There are multiple engineers who moonlight as musicians (like Theresa Vu, who has a No. 2 hip hop hit in Japan!), professionals who have already made multiple career transitions - all at the age of 35 and under - who prove day in and day out that they are just getting started.

Here’s a glimpse at a few more:

Surprising tidbits emerged about the 150 Next Wavers, too. More than 80% didn’t go to an Ivy League university for their undergraduate education, and only 15% earned a M.B.A. They’re 25% more active in charities, boards and advisory roles than the average LinkedIn member. They also work in 22 different U.S. cities, from San Francisco to Atlanta to Columbus.

And we can learn from their approach to business. For one, they set absurdly high goals for themselves. They are focused on changing lives first and building a good business second.  They take on big world problems — food scarcity, healthcare inequality, crime fighting — with data- and design-driven mindsets. One listee, Leslie Dewan of Transatomic Power, is even tackling climate change and nuclear waste at the same time.

Another takeaway: They write their own job descriptions. Carlos Gomez Uribe, the vice president of innovation at Netflix, helps oversee the company’s algorithms for recommendations. But his job didn’t exist when he joined the company. Take another Next Waver, Solomon Hykes, CTO and Founder of Docker. When asked how he picks a job he said, “I prefer to create my own.” Both show the importance of creating your own role and finding your way.

Hungry for more? Browse and share all 150 names. Check out my post on LinkedIn for more information on how we came up with the Next Wave list. Each quarter, we’ll be releasing a new LinkedIn List — and we’d love your thoughts on who to feature. You can nominate names for next year’s Next Wave list here.