As Coding Bootcamps Grow the Skills Gap Could Shrink

Technical talent is in high demand. As of publishing this post, a LinkedIn job search for “Software Engineers" in the US reveals more than 100,000 open jobs. Adding a couple more tech-related roles (“User Designer,” “Data Scientist”) increases the total to more than 200,000 job openings. Job seekers looking to meet job requirements can enroll in a Master’s degree program, but that comes with a 2-year opportunity cost. Now, a shorter path is emerging: fully immersive coding bootcamps.

Coding bootcamps typically last 6-12 weeks and require participants to show up to a class in person. Bootcamps are a relatively new model, but they’re a growing trend that could help close the skills gap. Tapping into the Economic Graph, we compiled aggregated data on over 150 bootcamp programs and more than 25,000 LinkedIn members who have indicated they are attending or have attended bootcamps to identify emerging trends.

In 2011, fewer than one hundred LinkedIn members indicated they had graduated from bootcamp programs. In 2014, more than 8,000 members completed coding bootcamps and added them to their profiles, reflecting a rise in acceptance of the bootcamp model. The number of bootcamp graduates in the first six months of 2015 has nearly surpassed all of 2014. At this rate, we can expect to see more than 16,000 graduates by the end of 2015 — more than double the total number of 2014 graduates.

Bootcamps come in all shapes and sizes, and have spread across the globe

The largest player in this space is General Assembly with over 9,000 graduates worldwide, accounting for roughly 40% of bootcamp graduates. It is followed by several US based programs such as Dev Bootcamp, Hack Reactor, Startup Institute, Code Fellows and App Academy. Other large bootcamp programs outside of the US are Bitmaker Labs (Toronto), Makers Academy (London), Lighthouse Labs (Vancouver), Ironhack (Madrid), and AlphaAppl (Libson), all with 100+ graduates.

While the majority of bootcamps focus on producing Software Engineers and Web Developers, a growing number of programs have expanded to other disciplines like Data Science (Insight Data Science, Galvanize) and User Experience Design (DesignationLabs, General Assembly).

With women making up nearly 40% of graduates, the bootcamp model could help bridge the tech industry’s gender gap

Based on gender inferred from a member’s profile, 38% of bootcamp alumni are women, a significant improvement over the 20% average for female representation of Software Engineers in the Technology industry indicated by previous Economic Graph research. Ada Developers Academy, Hackbright Academy and Skillcrush have led the charge in making bootcamps accessible to women, accepting only female applicants. While these programs specifically promote gender diversity in tech, programs like HackerYou (Toronto) have succeeded in balancing gender indirectly. 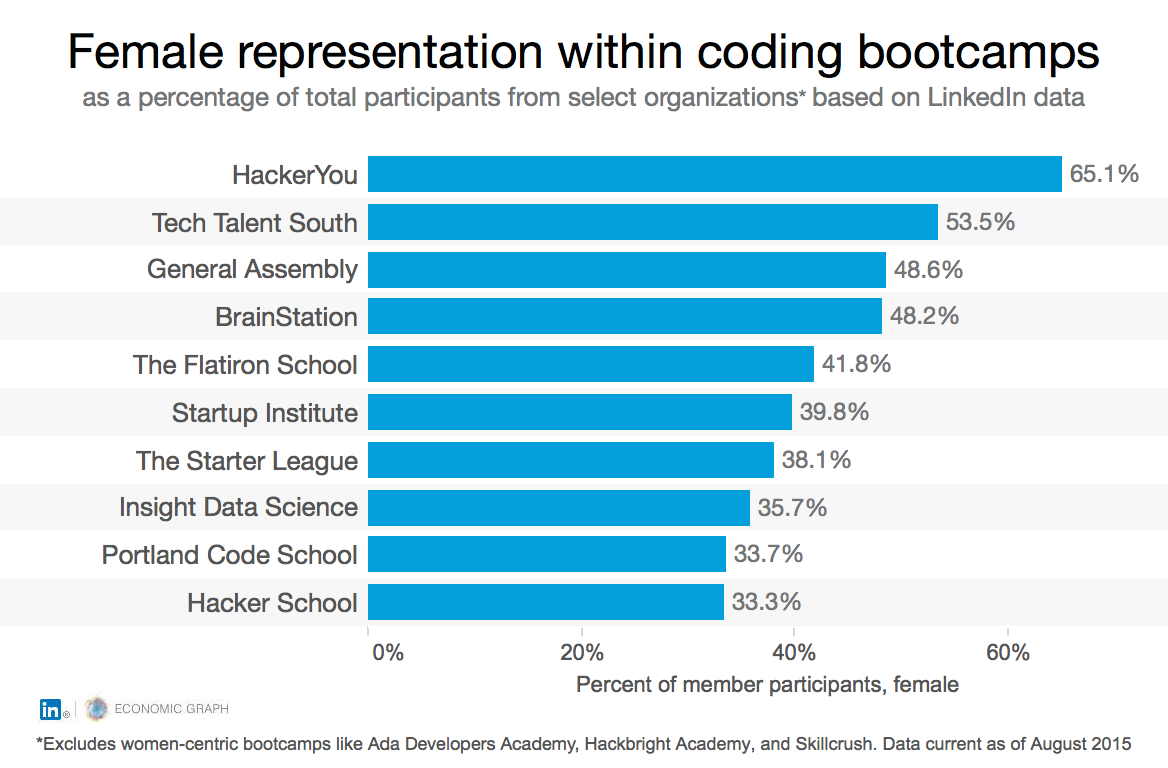 So how good are coding bootcamps at giving graduates the skills to place them in new jobs? We found that graduates have managed to land jobs at some of the largest tech companies.

We measured bootcamp outcomes by looking at the first job a member received after program completion, based on the job that had the earliest start date after their graduation date (if they indicated a graduation date).

Our research revealed many career transition stories, similar to the waiter turned data scientist, the barista turned coding instructor, or the English major turned software engineer. How does this trend play out at scale? We located the last job a bootcamp attendee held before entering their bootcamp. Combining this data with bootcamp outcome, we can measure the degree to which bootcamps have managed to reshape careers.

Two out of every three graduates have new job functions. Out of the 17,000+ bootcamp graduates with a job, approximately 11,000 of those graduates were hired into a function different from the one they held immediately prior to joining the bootcamp.

Not only are bootcamps helping people switch careers, they are helping people switch into a narrower set of higher paying tech jobs. For instance, Software Developers/Engineers, Web Developers/Designers, Graphic Designers, User Experience Designers, and Data Scientists collectively account for 14% of all pre-bootcamp occupations. Post bootcamp, they account for 40% of all placed graduates.

In 2012, there were nearly 80,000 STEM field Master’s degree earners in the US, according to the National Center for Education Statistics. So as far as educational models go, the coding bootcamp (with 16,000 graduates expected globally this year) is still in its infancy.  Still, initial signs show promise. We’ve seen their impact firsthand through our partnerships with organizations like Year Up. More and more members from all corners of the globe are using this non-traditional pathway to enter into the tech industry.

With more demand comes more accountability. Major industry bootcamps are already leading efforts (NESTA) to set up a governing body and create a set of bootcamp standards. Whether or not the bootcamp model will be sustainable in the long term will depend on how higher education institutions respond, and on how regulators decide to govern bootcamps in the coming years. We’re eager to see the next phase of growth.

As of June 2015 we collected over 150+ company names from the bootcamp aggregators coursereport.com and switchup.org, and matched the list to an existing company entity and/or education institution by the same name on LinkedIn. There were additional bootcamps found on coursereport.com and switchup.org that were not included in the analysis because a company entity was not created on LinkedIn.com before June 2015.

“Coding Bootcamps”: Given that there is not yet an industry standard definition of coding bootcamps/accelerators, we have decided to adopt a definition from Coursereport.com as reference: “Coding bootcamps are intensive, accelerated learning programs that teach beginners digital skills like Full-Stack Web Development, Data Science, Digital Marketing, and UX/UI Design. Since Dev Bootcamp first opened their doors in February 2012, the programming bootcamp industry has grown throughout the US and around the world. Bootcamps can vary in length from 6 to 28 weeks, although the average bootcamp is ~10 weeks long. Code schools teach a technical curriculum in popular languages like Ruby on Rails, Python on Django, JavaScript, and LAMP Stack, then match students with an employer network.” The 150+ bootcamps included in the analysis fit this definition.