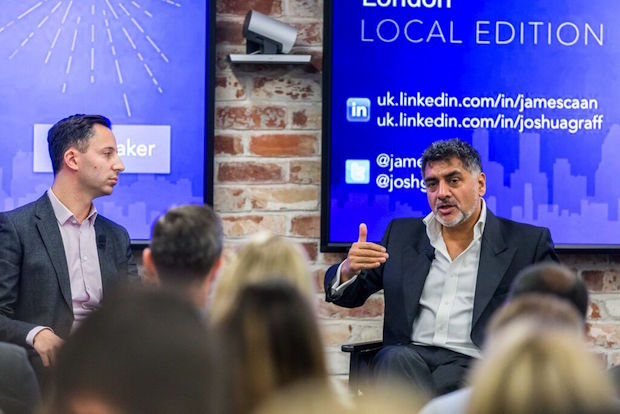 For those of you not familiar with Dragons' Den it’s a reality television show in the UK featuring entrepreneurs pitching their business ideas to the “dragons” in order to secure investment finance from a panel of venture capitalists, similar to Shark Tank in the U.S.

So, when I heard that James Caan CBE was going to be speaking at our LinkedIn Speaker Series in London, I was ecstatic! He’s always been my favorite “dragon.” He’s never shy of sharing how he made millions, yet it’s his warm, approachable, and down-to-earth personality that inspires all who listen.

James shared multiple stories that hit home for me and I wanted to share the three lessons that left a lasting impression:

At 16-years-old, James left home with nothing but the clothes he was wearing, determined to go and face life on his own. Although he was a young man, he wasn’t afraid to take risks.

James emphasized the importance of defining what that risk really is and how far too often, the obvious choice is what we tend not to do. It made me think about why so often we don’t take those risks and fail to follow our guts. But James is an excellent example of what can happen when you listen to it...investments and risks can pay off.

Lesson #2: Surround yourself with people whose strengths are your weaknesses

Even though James has made millions from his ventures he says, “I’m weak on numbers and don’t know how to work a spreadsheet. I surround myself with people who have that skill set and it makes me look good.”

As someone who’s not the best at math, it’s a great reminder and motivator, that your weaknesses don’t have to be the demise of your goals. If a man who has created 28,000 businesses, 41,000 new jobs, and is worth millions accepts his weakness, so I shall too!

His catchphrase: What does that mean? James says the most dangerous behavior to have is to just nod in acceptance when you’re not sure what is being communicated. So instead, he asks this question over and over again until he’s clear.

Even as simple as it may sound, most people continue nodding in fear of showing vulnerability. What will others think about us? What will they say? Will they question our ability to be a leader? A visionary? I challenge you to try and ask, “So what does that mean?”

Even with these three lessons still fresh in my memory, James left us with two pieces of fatherly wisdom passed down to him, “Observe the masses and do the opposite,” and “Always look for opportunities where both parties benefit.”

Here’s to taking risks, surrounding yourself with strength, and never just nodding.